Google searches are an interesting signal in crypto investing. They’re not necessarily predictive. But they do often correlate with price.

The correlation between Google searches for bitcoin and the price of bitcoin is fairly well established. The more searches there are, the higher the price goes.

Last month, Google searches for “ethereum merge” hit an all-time high. And sure enough, the price of Ethereum went up. 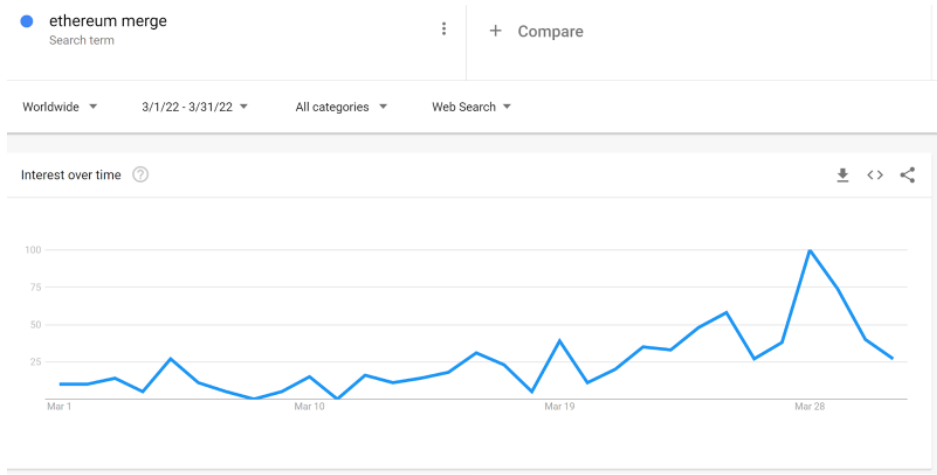 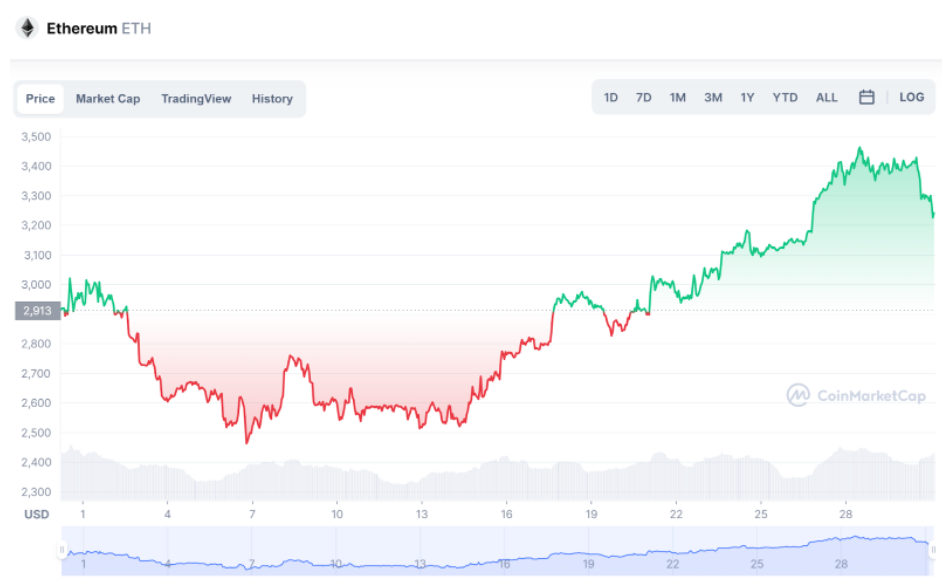 As you can see in the charts, Ethereum’s price tracked pretty closely with the increase in searches for Ethereum merge. And Ethereum (+11%) outperformed bitcoin in March (+3%).

So what is the Ethereum merge? And why is it impacting Ethereum’s price?

Right now, Ethereum operates on what’s called a proof of work (PoW) protocol, as does bitcoin. Unfortunately, the way Ethereum works using this protocol has proven to be too expensive and inefficient to reliably use at scale. So Ethereum — which is the blockchain platform that is most used in DeFi (decentralized finance) and NFTs (non-fungible tokens) — has decided to move to a proof of stake (PoS) protocol.

The official shift from PoW to PoS is known as the merge. It’s supposed to take place sometime this summer (probably in June).

The hope and belief of the Ethereum community is that by shifting to a PoS protocol, Ethereum will become much quicker and much more efficient to use. And as a result, it can be scaled up to become the backbone of the decentralized blockchain universe.

If you want a more detailed technical explanation, the good folks at MIT published one here. But here are the key things you as an investor need to know:

There have been three bitcoin halvings — events that reduce the new supply of bitcoin entering the market. The halvings are built into bitcoin’s programming. They happen roughly every four years.

Each bitcoin halving has triggered a bull market for bitcoin. That’s because the total circulation of bitcoin cannot exceed 21 million bitcoins. That hard cap combined with reduced supply of new coins coming onto the market create a scarcity effect. And that scarcity effect helps drive up prices. (More on this in cool charts here.)

The Ethereum merge won’t create a scarcity effect. But it should dramatically improve Ethereum’s usability and long-term viability.

The spike in Google searches for Ethereum merge suggests investors are starting to price the effects of the merge into the market. But if Ethereum’s post-merge leg up is anything like what we see from bitcoin halvings, what we saw in March might be just the beginning of a really big year for the world’s second-largest cryptocurrency.

Inflation Holds the Key to Market Performance in 2023

Behind the Pick: A High-Performing DEX in a Brutal Bear Market

Inflation Holds the Key to Market Performance in 2023

When we first recommended Genius Juice in May 2021, we were impressed by the company’s 100% organic coconut smoothies. They’re protein-rich, filling, nutritious,…