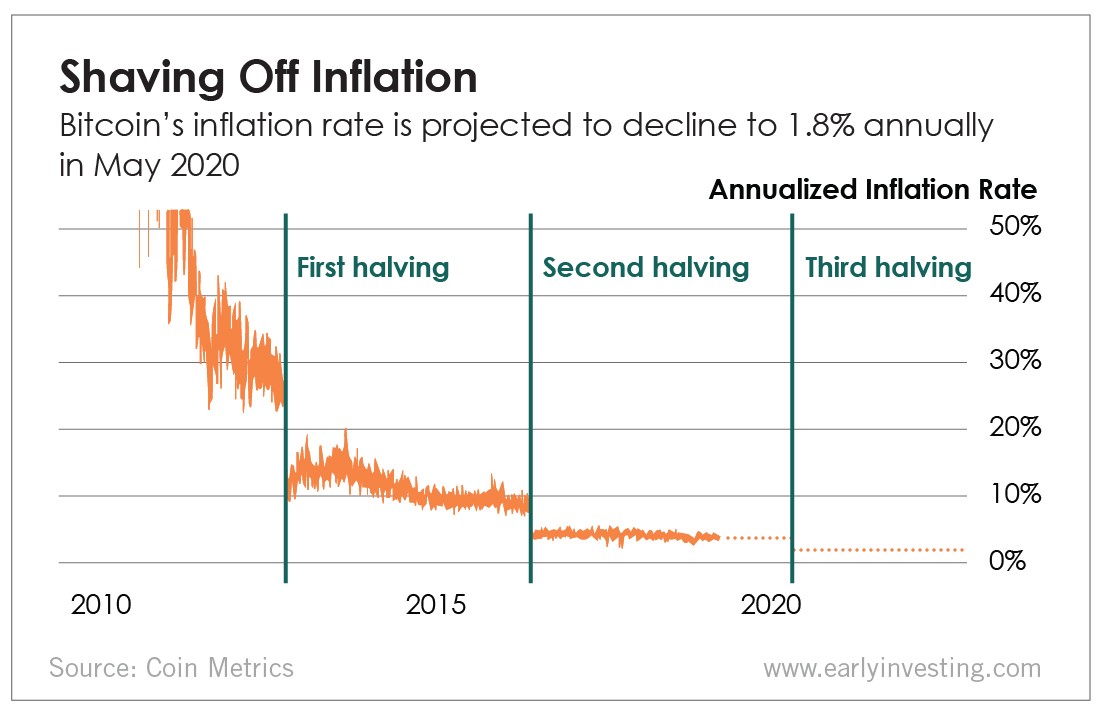 We’re a year away from the next bitcoin halving, which means the new supply of bitcoin will be cut in half for the third time… and bitcoin’s inflation rate will be cut along with it.

This is one of many beautiful things about bitcoin. It’s designed to have a decreasing inflation rate. And unlike fiat money, there is a limited supply, and it can’t be printed at will by the government.

We need a stable, scarce asset like bitcoin now more than ever. Global debt has grown to more than $240 trillion – more than three times the size of the global economy. The U.S. alone accounts for more than $22 trillion in debt.

Fortunately, bitcoin was created as a kind of antidote to excessive debt. As Andy Gordon wrote:

[Satoshi Nakamoto] understood that it was a fool’s game to trust fiat currency or the big banks that leverage and manipulate said currency… or to trust the biggest manipulator, protector and benefactor of money: governments.

I have no way of knowing for sure, but I suspect Nakamoto’s disinclination to trust big government, big banks, and misused and abused fiat money predated 2008.

And when the financial crisis of 2008 came perilously close to becoming an “extinction event” for U.S. and overseas banks, it probably confirmed his worst fears.

If excessive debt was the disease, then he created bitcoin as the cure.

Bitcoin can also act as a hedge against inflation… or as a lifesaver. Countries with disastrously high inflation rates turn to bitcoin as a stable currency. One economist in Venezuela – which saw inflation hit almost 1.7 million percent last year – said bitcoin saved his family.

So what else does the halving mean for bitcoin? Historically, bitcoin’s price experiences a major rally about a year after a halving – but the run typically begins at least a few months before. So a number of analysts are predicting major price spikes.

Bitcoin is a scarce and valuable asset. We expect the halving to have a significantly positive impact on its price.