The last 18 months have been a crazy period for the U.S. stock markets.

In the second half of 2018, it looked like we were going into a sustained interest rate tightening cycle. The Fed had interest rates on autopilot, and they kept going higher.

The markets weren’t happy about it. In November 2018, I wrote the following:

If equity and real estate markets get hit hard – which will probably happen if rates get back to 5% – everyone will be begging the Fed to lower rates and eventually restart quantitative easing. CNBC’s Jim Cramer is already screaming at the Fed to pause rate hikes so stocks don’t go down. So is President Trump.

Then, December 2018 was the worst December ever. Stocks declined 20% from peak to trough. Tech giants were hit especially hard. Apple shares dropped from more than $200 into the $140s.

The bear market didn’t last long. In January 2019, the Federal Reserve announced it was “pausing” interest rate hikes. I wrote the following around that time:

The Fed has the power to juice markets higher at the press of a button (using lower interest rates and bond buying), and it has become intoxicated by that power.

Whenever the stock market declines, the Fed lowers interest rates, or even buys bonds to dramatically increase liquidity and keep rates low.

Coincidentally, U.S. stocks bottomed around this period and raced higher.

The Fed wound up cutting interest rates three times in 2019. The market continued higher, and we continue to hit new records today. Apple shares now trade at more than $300, valuing the company at $1.4 trillion. The S&P 500 ended 2019 with an impressive 31.5% performance for 2019.

Unfortunately, it appears U.S. stocks have gotten well ahead of fundamentals. For most of the time since the 1950s, corporate profits and stocks have been closely correlated. 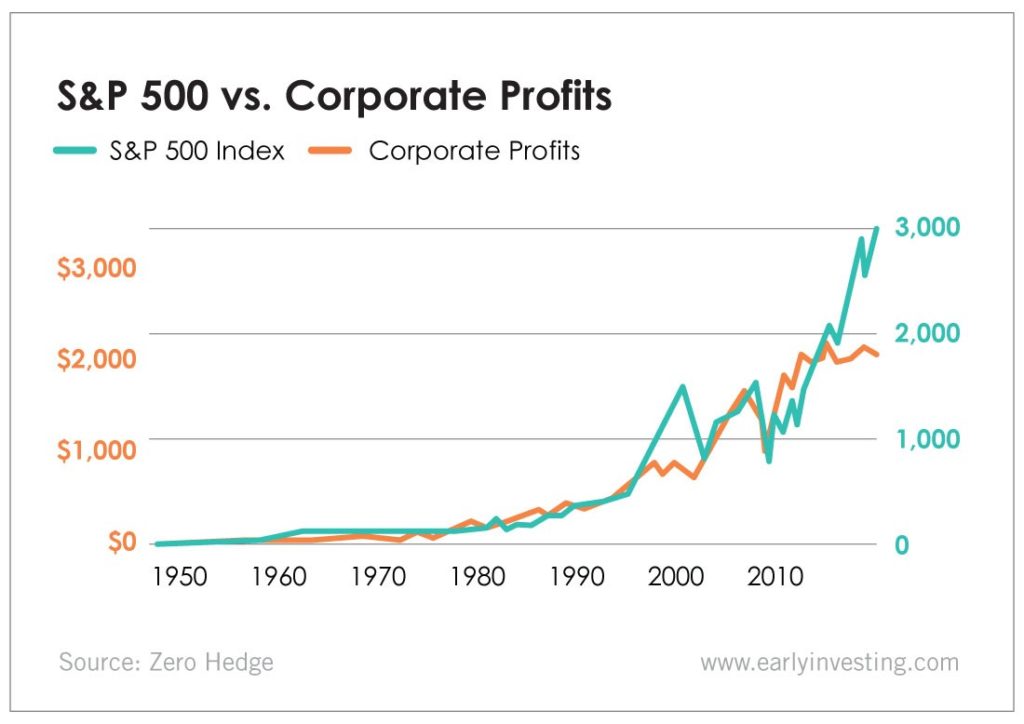 There are two big exceptions: the 2000 tech bubble and today. It sure looks like stocks got ahead of fundamental profits in both these cases.

So I’d say that stock prices are somewhat divorced from reality today.

The big question is this: How long will this bull market last? My guess is that it will go on longer than many of us would expect.

Central banks can have incredibly powerful effects on stock markets. When they cause artificially low rates, as most central banks do today, the yield on bonds goes down. Therefore, the yield on stocks looks more attractive by comparison.

So if low interest rates continue (and I expect them to), stocks could remain more expensive than usual for a long time.

And if the Fed keeps pumping liquidity into the system through repo (repurchase agreements) and other bond purchases, it could send prices even higher.

The key factor I’m watching is stock buybacks. Companies buying back their own stock is the primary driver of share purchases today. These buybacks are starting to slow, and if this trend continues, the bull market could be in trouble.

Overall, I remain cautious on U.S. markets. I think shares are expensive, but they could get more so. So I’m definitely not shorting.

But I’m not buying U.S. stocks either. I’ll continue to put money into emerging markets, which are finally starting to pick up steam. Emerging markets have underperformed severely over the past decade, and I think we’re close to a reversal in this trend.