If you’ve owned the S&P 500 for the past decade, congratulations. You nailed it. Well done.

The S&P 500 has performed so incredibly well, a sort of religion has popped up around owning just this index.

“Buy and hold the S&P 500” has been great advice for a long time. But I think that time is coming to an end.

Who has been buying all the stock since 2009? The companies themselves. Take a look at the chart below. The orange line shows net purchases of stock (buybacks) by U.S. companies. The light blue line shows households, which, as you can see, have been net sellers of U.S. stocks. Same for U.S. pension funds and other institutions (teal line). Foreign buyers (lime green line) have contributed to the market’s rise, but as you can see, they make up only a small fraction of buybacks. 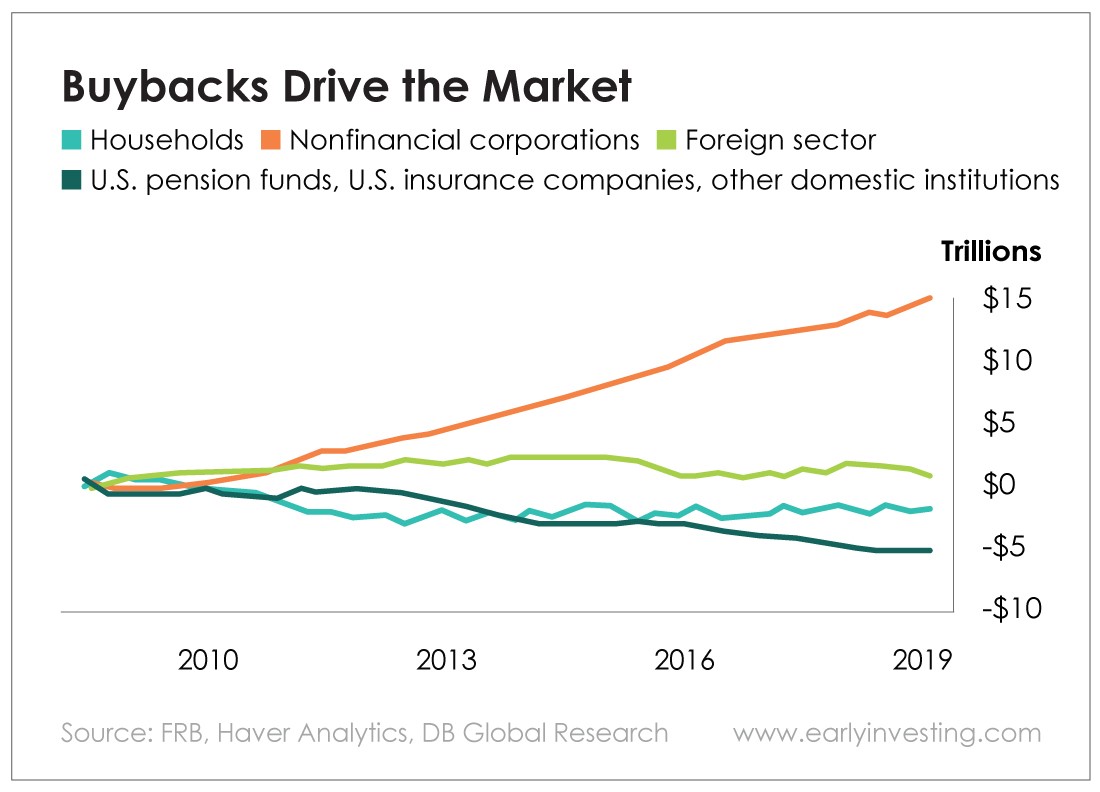 And as you can clearly see from the chart below, companies tend to execute buybacks at exactly the worst times (market tops). 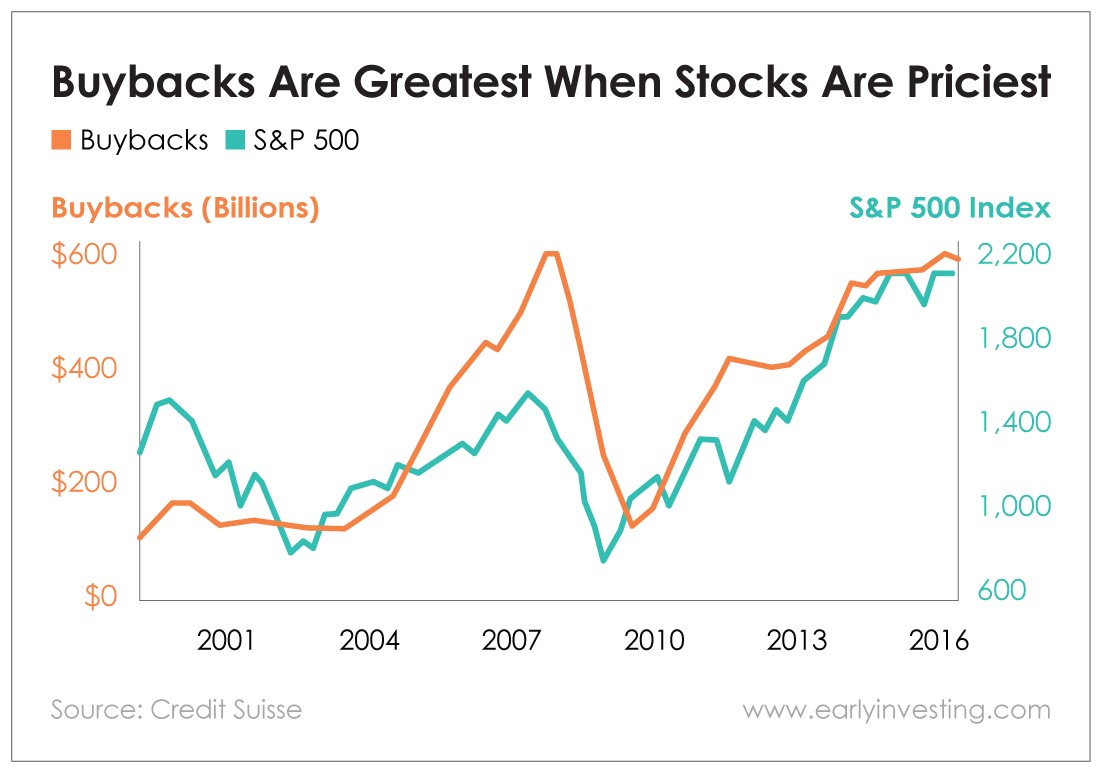 Just how much are U.S. companies spending on buybacks? Too much.

So between dividends and buybacks, corporate America is spending all of its free cash flow (and more). How is this possible?

Here’s another excerpt from the same article by 13D Research:

Over the past year, nonfinancial companies in the S&P 500 have seen cash levels decline 15%, the largest drop since at least 1980. Meanwhile, gross debt outstanding for S&P 500 companies has risen 8% over the same period.

In theory, buybacks are great. Companies get to buy back their own shares when they are undervalued. But it rarely seems to work out that way. Too often, management uses buybacks as a tool to hit share price targets and reap big bonuses.

And now buybacks are officially slowing. This headline, “Slowing Share Buybacks Remove a Pillar of Stock Market,” in The Wall Street Journal caught my eye last week, as did this part of the story:

U.S. corporations are repurchasing their own shares at the slowest pace in 18 months, a potential sign of more volatility as the buyback bonanza from the corporate-tax overhaul wanes.

Companies in the S&P 500 repurchased about $166 billion of their own stock in the second quarter, S&P Dow Jones Indices projects, down from $205.8 billion in the first quarter and $190.6 billion in the same period a year ago. That marks the lowest total since the fourth quarter of 2017 and the second consecutive quarter of contraction.

To review… Buybacks have been the primary driver of the U.S. stock market since 2009. At current levels, they are totally unsustainable and are finally beginning to slow.

Who’s going to pick up the slack and buy all those shares? The Fed? Maybe. Japan’s central bank has been buying stocks for years, but it doesn’t seem to have helped the market one bit.

To be clear, I’m not saying you should go out and dump your U.S. stocks. I’m just saying that everyone should consider a little diversification, especially if 90% of your portfolio is U.S. stocks, as a lot of investors’ portfolios are.

Time to Diversify Into “Alternative” Assets

My investment game plan hasn’t changed much over the past five years. I still love investing in fast-growing and disruptive U.S. startup companies. Software is changing the world, and companies that do it well are taking over across all industries. Most of the exciting stuff here is happening in private markets, but there are some ways to play this with small cap and midcap stocks.

I continue to prefer emerging stock markets to the U.S. markets, as I explained in detail here a few months back.

Two significant additions to my portfolio this year are gold and silver. Regular Early Investing readers know I believe we’re headed toward a chaotic financial period. (One could argue that we’re already there, with $15 trillion of negative-yielding bonds around the world…) So gold and silver (as safe-haven investments) should do well going forward. For similar reasons, I will continue to hold bitcoin and a few altcoins.

Lastly, I continue to find good opportunities in both public and private cannabis markets. As regular readers know, I believe cannabis is going to be a standout sector in the U.S. and globally for decades to come.

That’s basically my alternative investment game plan for the next decade-plus. I believe that owning alternative assets during this period will be more important than ever.