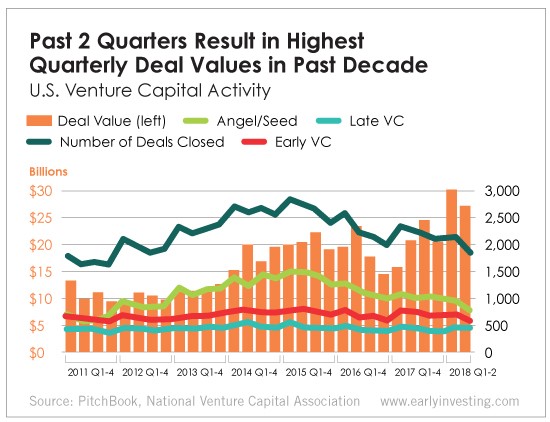 As we reported in Saturday’s News Fix, venture capital firms are raising and investing funds at a record clip. The first half of 2018 saw more venture capital invested in a six-month span than any similar period this decade. And it’s the highest six-month run since 2000.

Through Q2, more than $57 billion has been invested in U.S. venture capital-backed companies, which exceeds the full-year total for six of the past 10 years. The data comes from a report by PitchBook and the National Venture Capital Association.

The numbers are impressive. Venture capital is clearly on a roll. But when you look behind the numbers, another story jumps out. There’s a massive opportunity for early investors.

Let’s start with the light green and red lines. For most of this decade, angel/seed investing has been clearly outpacing early VC.

The report also found VCs are gravitating toward larger deals but investing in fewer startups… That’s why the number of VC deals (the dark green line) is dropping.

With the “big” money being funneled into a smaller number of companies, there’s a huge opportunity for early investors like you. The number of smart and innovative startups seeking early funding from retail investors is on the rise. The next Spotify, Uber and Dropbox are waiting to be discovered. Those are the companies we’ll be looking for and recommending to our members.

Here’s some more good news for early investors: 28 startups went public last quarter. That’s the most in three years. Companies need to go public or get acquired for early investors to make money. That takes time. But the environment is clearly favorable. And as the investors in the companies that went public this year learned, early investing is a long game, but the paydays do come.

It’s encouraging to know that it’s not just the billion-dollar firms that have power in this investing space. Individual investors can put money in the companies they believe in and reap the rewards when those companies go public just as easily as the big guys can.