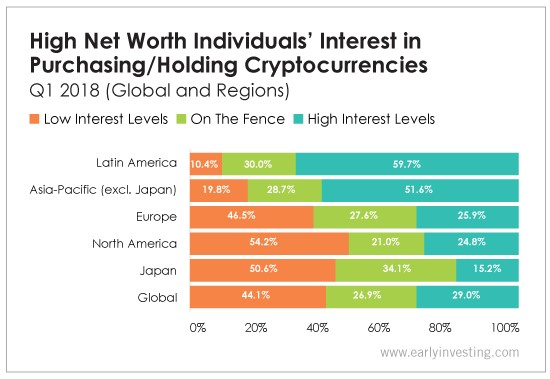 Nearly 60% of high net worth individuals surveyed by Capgemini, a French business consulting corporation, showed interest in investing in cryptocurrency in Q1 of this year. Almost 80% of the respondents are worth $1 million to $5 million, roughly 2% are worth more than $20 million and the rest are worth somewhere between $5 million and $20 million.

To get an expert’s perspective on the numbers, I’m turning to our own Andy Gordon.

Q: Andy, given what we know about countries like Venezuela, the high interest in Latin America seems to make sense. With hyperinflation set to hit 1 million percent in Venezuela, many Venezuelans have been turning to cryptocurrencies. Is the interest in South America driven primarily by Venezuela? Or is there something more at play?

A: Venezuela is a big part of the story in Latin America. Unfortunately, it’s not the only country with economic problems. Argentina is grappling with an inflation rate of more than 20%. Its currency is plummeting. And the central bank raised interest rates to 40% in May to try to prop up the peso. What’s more, there’s a lot of people from Central and South America working here and sending remittances back home via bitcoin. They’re NOT the ones being surveyed here, but it adds to the zeitgeist that bitcoin has a real purpose.

The fear of inflation contributes to bitcoin’s popularity in Latin America. It lurks in the back of our minds too, of course. But Latin Americans have more reason to fear hyperinflation than we do. Historically, their economies have been more prone to severe bouts of inflation than the U.S. has. Take Brazil. As recently as 2016, it was fighting a double-digit inflation rate. And that’s nothing compared with the ‘80s and ‘90s when inflation in Brazil surged by several thousand percent. So I’m not surprised that Latin America shows such high interest in cryptocurrencies.

Q: The high interest in the Asia-Pacific region is an interesting one. China has been all over the place, first banning ICOs, then crypto exchanges, and then openly praising blockchain technology. South Korea is known as a bit of crypto hub. Are you surprised that the high interest mark topped out at 51.6%? Were you expecting higher or lower? What do you think that number might look like a year from now?

A: Frankly, I am a bit surprised. I thought it would be 20% to 30% higher. I think China’s crypto bans have taken the interest level down a notch or two. And Korea, at the time the survey was done, was talking about restricting or even banning cryptos. It had to back off those threats because of a groundswell of opposition from everyday investors, by the way.

Singapore is doing a lot with blockchain, but it’s not going crazy over buying cryptocoins. But I bet if it took the same survey now, Asia would fare a lot better, except for China. And a year from now? I expect even more interest because China should begin easing its restrictions by then (although very cautiously, it being China).

Q: I’m surprised by the low interest in Europe. This month, the EU’s Policy Department for Economic, Scientific and Quality of Life Policies released a report on central banks and cryptos. The report warned that “policy makers and regulators should not ignore VCs (virtual currencies), nor should they attempt to ban them… VCs should be treated by regulators as any other financial instrument, proportionally to their market importance, complexity and associated risks.”

That sounds like a pretty reasonable stance to me. And it seems like policymakers and regulators are on top of things. Why is European interest lagging behind Asia’s?

A: I mean, let’s face it, Europe is just a laggard. Asia leads the way as early adopters, followed by the U.S., and there’s Europe, bringing up the rear. Pockets of Europe are very pro-crypto, like Malta, Switzerland and Gibraltar. But these are tiny places with small populations that don’t move the needle in a Europe-wide survey.

By the way, do you really think anybody listens to this EU department you mentioned, except the policy wonks who toil in Brussels? (And believe me, they’re not high net worth.)

Q: The lukewarm interest in North America seems odd as well… then again, with the U.S. government still figuring out how to regulate crypto, maybe it’s unsurprising that so few people are interested. (Though we’ve witnessed some promising conversations so far.) Is it a lack of knowledge about crypto in general or more of a distaste for investing in a nascent industry? Something in between?

A: It doesn’t surprise me in the least. Remember, these are very wealthy people who were surveyed. Their brokers are a conservative lot. They know what they know. And they don’t know bitcoin, as a general rule. I know for a fact most of them are telling their wealthy clients to stay away from crypto, under the presumption it’s too volatile and only gangsters use it. It’s a very backward mindset.

Q: Japan has the lowest interest level of all, which doesn’t make sense to me. Instead of regarding crypto with hostility, it’s one of the few countries building a framework for ICOs and exchanges. Shouldn’t the numbers reflect that?

A: At the time of the survey, a big Japanese cryptocurrency exchange, Coincheck, was hacked. It lost north of $400 million. That’s a pretty big hack, and it received a lot of publicity in Japan (and here too). So that drove the numbers down for the survey. Japan is leading the way on many crypto fronts. These survey results are basically misleading. They represent a snapshot of a particular time. Old news. The Japanese have moved on.