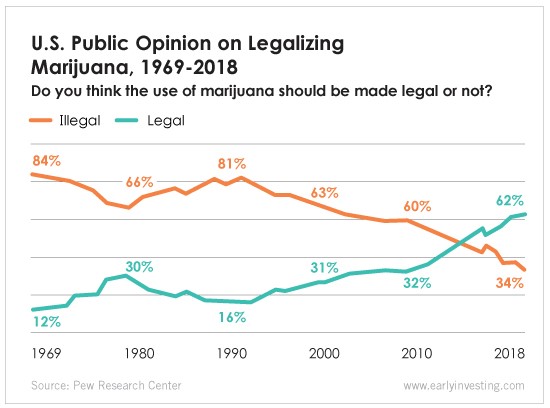 According to a new Pew Research Center survey, a full 62% of Americans say marijuana use should be legalized. This follows a steady rise in favor of legalized marijuana over the past decade.

The change in attitude reaches across generational lines. The survey found 74% of millennials, 63% of Gen Xers and 54% of baby boomers favor legalizing marijuana.

Policy seems to be following sentiment. There are now eight states (plus the District of Columbia) that have legalized marijuana for recreational use. Thirty states have laws broadly legalizing marijuana in some form (medical use, decriminalization of possessing small amounts, etc.).

This is good news for cannabis investors. A budding industry means there’s ample opportunity to invest early in emerging, marijuana-related companies. As Adam has mentioned in a previous Early Investing Mailbag column, you’ve got a lot of choices. There are companies targeting all different areas of the weed market – growing, application, extraction, processing, delivery, etc.

But as always, do your due diligence. Be prepared to say no to the majority of deals that you see, and look for founders who know what they’re doing. (For example, see if they have previous experience building a business in the cannabis sector.)

Just like the crypto industry, the cannabis market is new and growing rapidly, which means there will be tons of new companies looking for investors to scoop up cheap shares. But that means the path to finding future stars will be littered with plenty of duds.

As Adam has explained in the past, Richard Nixon’s war on drugs has only brought us pain. It’s given America the highest prison population in the world (which has disproportionately impacted black Americans). And it’s blocked important studies that could help us make progress on the medical marijuana front.

Now that America’s cannabis views are shifting, lawmakers will have to make a lot of adjustments. The ball is already rolling, and legalization opponents will have a hard time stopping the momentum.

We are – and will continue to be – on top of these developments. Stay tuned.