Okay, CVS and Walgreens are providing home delivery service. But they gave customers an immediate incentive to NOT take up the offer.

Online glasses seller Warby Parker is worth about $1.75 billion. The U.S. vision care industry in total was $34.9 billion in 2016. That’s just over a tenth of the size of the U.S. “prescriptions market.”

Dollar Shave Club was bought out for a cool $1 billion. The global men’s grooming market was $20.5 billion in 2017, according to Statista. That’s 6% of the Rx market in the U.S. Why so small?

So how do companies that sell to everybody do?

Instacart, which delivers groceries the same day, is now worth $2 billion. That’s nothing. Grubhub has a $9.5 billion cap.

That’s a market that even Amazon can’t ignore. It bought Whole Foods to get into the fresh food delivery business. Can’t blame it. In fact, I’m surprised it didn’t act earlier.

It’s pretty late in the game right now. You’d think all the huge opportunities were off the board.

That isn’t the case.

Amazingly, nobody has run away with the free same-day delivery meds business.

Not even Amazon (which clearly has its eye on the pharmacy sector – more on that in a moment).

But one small California company is making a strong play to make this giant market its own.

And that’s the company I’m introducing to you today.

NowRx began in 2015. Even back then, this enormous opportunity was hard to miss.

NowRx understood that how drugs were sold was badly flawed. And it correctly believed that the current long-in-the-tooth model would offer little resistance to a tech makeover.

In 2015, there were 64,000 traditional pharmacies. And they dispensed 5.2 billion 30-day prescriptions to customers coming into the store to pick up them up.

As these customers waited (and waited) for their drugs to be ready, they bought other products.

Yup, that’s the model that makes stores like Walgreens and CVS tick.

It’s a great model, except for the fact that it requires sick and often contagious people to trudge into their stores and buy products as they wait for their meds.

There’s little incentive for these stores to become more efficient, much less offer delivery services that would reduce store traffic.

Okay, so how about Amazon?

It made a splash last year with the acquisition of PillPack, a mail-order online outfit that pre-sorts pills into date- and time-stamped packages.

It was a wake-up call for CVS, Walgreens and Rite Aid. But PillPack’s “old-school business model doesn’t really apply to same-day delivery, nor do we consider it direct competition,” says NowRx.

After about 40 minutes of intense back-and-forth discussion with NowRx’s two co-founders, I agreed with them. And I found Amazon’s increased interest in pharmaceuticals delivery a big positive. The brick-and-mortar stores all have mail-order operations. They’re all looking to make their meds-dispensing business more convenient.

And now they’re under attack. More than ever, NowRx looms as a possible savior (and takeover target) to these national store brands (and possibly Amazon itself).

After its acquisition of PillPack, Amazon finds itself no closer to copying NowRx’s same-day delivery service. It still has to build that infrastructure from scratch, including getting the right licenses. (PillPack’s licenses from 49 states are useless for copying what NowRx is doing.)

Amazon could decide to build and license the required network of local pharmacies state by state, but it would have had to do that whether or not it acquired PillPack.

There are several other challenges for Amazon in retail pharmacy…

Prices are determined by third-party payers (insurance health plans). So Amazon can’t use its favorite tactic – undercutting the prices of other retailers. Nor can it drive off the competition by offering the widest selection – another favorite Amazon marketing ploy. It simply doesn’t apply. Whatever drug is requested, NowRx can easily procure it from its supplier.

While researching Amazon in the days following my chat with the NowRx founders, I found out Amazon’s licensing forays have been in the wholesaler (and with the PillPack acquisition) mail-order pharmacy space. Both have vastly different business models than NowRx.

Where Did All the Competition Go?

So who’s left in the same-day delivery space for meds?

There are three startups focused on free same-day delivery – two on the West Coast and the other operating out of New York City. I checked them out (of course). NowRx is executing at a higher level and deploying superior technology.

That’s no guarantee that it will win the market. Things can change.

But, rather incredibly, what it means right now is…

NowRx is in a strong position to dominate this massive $335 billion ripe-for-disruption market space.

This is truly an outstanding opportunity. I’ve done the vetting.

I can’t share with you everything I’ve learned. I don’t want to write a 100-page report. And I don’t think you want to read one, either!

For those of you who are new to First Stage Investor, these are the four M’s – market, monetization, metrics and management.

Taken together, they cover a lot of the research I do. But before giving you a quick rundown of the four M’s, you should know exactly how NowRx is attacking the brick-and-mortar pharmaceutical industry.

With a lightweight physical imprint and the latest tech tools, it operates at a fraction of what it costs traditional pharmacies to sell to the public.

NowRx has five locations so far, in the San Francisco Bay Area. And its prescriptions can be ordered via the NowRx app, text, fax, email, telephone and technology assistant tools such as Google Home.

It plans on expanding its geographical footprint… beginning by covering the entire San Francisco metropolitan area. Los Angeles is next… followed by other West Coast locations like San Diego and Washington.

The added convenience alone should be more than enough to attract customers.

According to a 2013 study, the median wait time at a pharmacy is 45 minutes. A third of visits require a second trip back.

Its services also increase the likelihood of timely prescription fills… encourage medication adherence… and reduce the number of missed refills.

This is key. The more doctors who provide references, the faster the company can grow.

And now, here’s my take on the four M’s.

Market. What can I say? It’s huge. It’s getting bigger. And it’s not going away.

Mainly because it’s part of a broader and firmly established trend: the rapidly expanding on-demand economy.

The on-demand economy is attracting more than 22.4 million consumers annually. It’s no longer confined to early adopters, either. It’s attracting mainstream consumers who want their platforms to be user-friendly, safe and fast.

At the same time, traditional retail pharmacy is a $280 billion industry that’s growing by $20 billion a year.

Prescription usage should continue to grow, thanks to aging boomers, increased life expectancy, and an expanding universe of people eligible for the Medicare prescription program and new drug therapies.

NowRx has hitched its wagon to a market with two powerful drivers – one external to Rx and one internal to Rx. Nice. 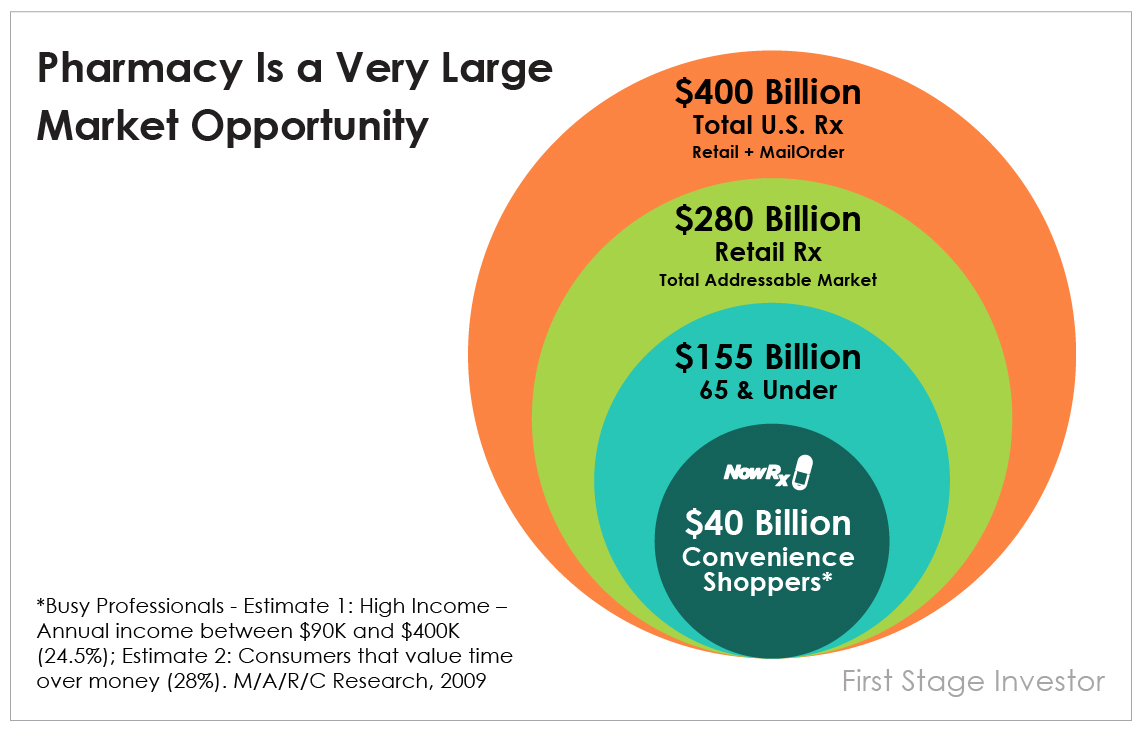 A tremendous 90% jump year over year. 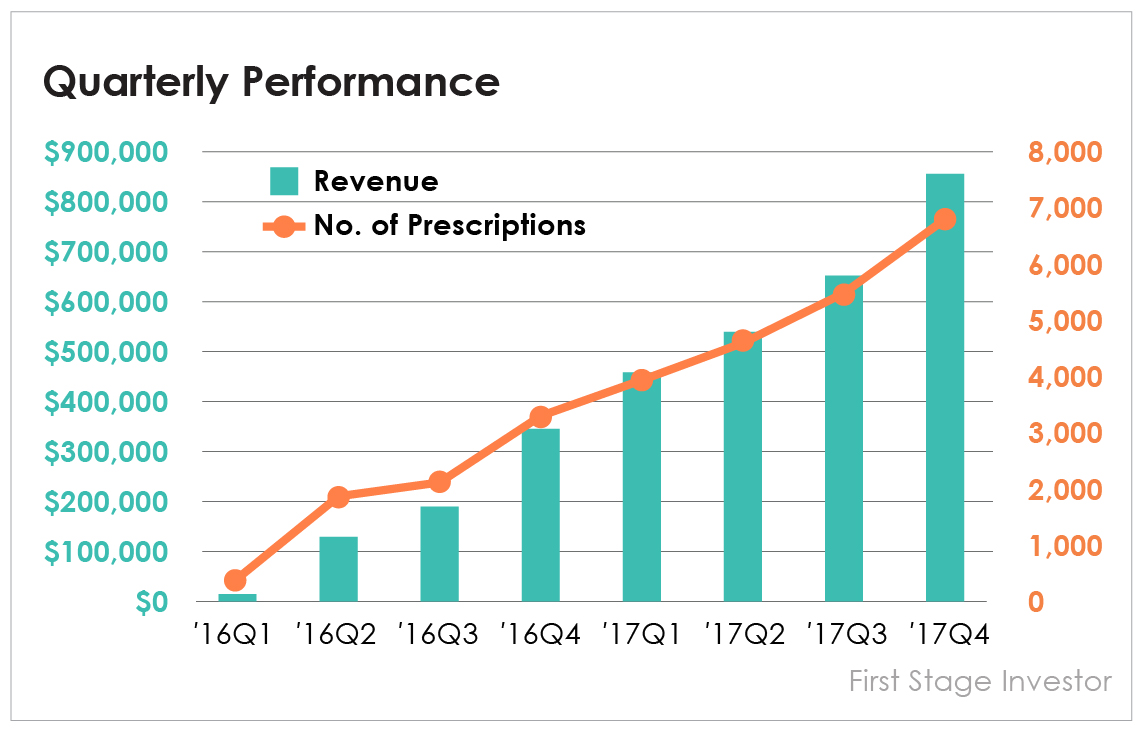 Better yet, revenue in the most recent months is pouring in at an annual clip of $7.2 million.

Customer lifetime value is $300. With an acquisition cost of less than $40, a 7.5 multiple shows extremely strong monetization of its customer base.

The company had a gross profit of $634,842 in 2018. But the money it spends remains higher than the revenue it makes. NowRx doesn’t expect to make an overall profit for several more years, which is typical for companies this early on. At this stage of development, it’s more about increasing customers, sales and sales channels and proving product market fit. NowRx has made excellent progress on all these fronts, including indications that it can scale.

But how about those customers? Are they or can they be effectively monetized? The early evidence says yes – through repeat orders, which have driven the lifetime value of customers to $300.

What I’d like to see next are steps to monetize the customer data it’s collecting.

“It’s some of the most valuable healthcare data available,” the NowRx team told me. It’s fully aware that its business automatically generates a substantial database of medical prescription data. And the company understands its potential and plans to develop powerful tools to leverage it.

Management team. Cary Breese is the co-founder and CEO of NowRx. He’s equally knowledgeable in data management/analytics, and health insurance, as well as in growing small companies and enterprises into much bigger ones. In this latter capacity, he’s gained valuable experience in ops, financing, marketing and sales, and risk management. One of his more impressive accomplishments? Taking over a struggling insurance unit – Trafalgar Insurance Services – and returning it to profitability before selling it for an 18X (cash-over-cash) profit.

His co-founder and chief technology officer (CTO) is Sumeet Sheokand. Cary met Sumeet while they both worked at GenieDB, a tech startup that provided a distributed MySQL database-as-a-service to enterprises. Cary was the CEO, and Sumeet was the CTO. The partnership proved so successful that both were eager to join forces again in this new venture. Sumeet brings a versatile skill set from his technology management work in a number of enterprises.

Cary and Sumeet complement each other extremely well. They make an effective team, with the right blend of entrepreneurial, industry-specific (health, insurance, data) and technical experience to lead NowRx to greater heights.

Everything considered, NowRx represents an outstanding investment opportunity. It’s executing its on-demand delivery model beautifully. It has formulated a well-thought-out pathway to scaling. The opportunity is unusually large and – as Amazon’s foray into the prescriptions mail-order business makes clear – ripe for disruption.

“Amazon … validates our business model. Our $400 billion-plus prescriptions market is being disrupted as we speak,” says Cary.

In short, it has made a great start, at once timely and effective.

I’ll say it again… This market opportunity is NowRx’s to lose. Here’s how to invest.

If you’re already registered with SeedInvest…

If you’re not registered with SeedInvest…

Editor’s Note: If you’re new to First Stage Investor, or if you just need a refresher on how to invest in startups through portals like SeedInvest, check out our video tutorial “Investing in Startups Through Online Portals.” 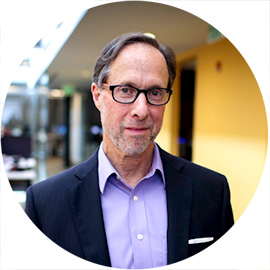 I made my chops as an entrepreneur and investor with over 30 years of experience at building wealth for myself and others. I graduated from the London School of Economics a year after the bicentennial. By the way, this is the same school that produced 34 heads of state including John F. Kennedy… and another 18 Nobel Laureates…

View all articles by Andy Gordon