I’m excited to announce our newest recommendation. The company is called Scrap Connection.

Before I get into why we’re recommending this company, a little backstory…

I’ve done a couple of mildly interesting things in my life. One was heading a trade and financing company based in Asia.

It was fun. I made some money from it.

But, to tell you the truth, it also probably scarred me for life.

I found out pretty quickly that Asia isn’t the easiest place to do business.

These are just a few of the indignities I experienced:

Believe me, I could go on.

People here have no idea. You have to experience it yourself to really understand.

So when I first talked to Chris Yerbey, the founder of Scrap Connection, he struck an immediate chord.

He told me how rampant fraud was in the global scrap metal business.

Now, I was never in the scrap business myself. But, back in the day, during my business travels throughout Asia, I heard plenty of stories.

If nothing else, it was a form of therapy. You told me how you were lied to and cheated out of hundreds of thousands of dollars, and I did you one better with my story.

I usually held my own in these competitions, except when I talked to those poor old scrap guys.

Man, they had it bad. I could never top them.

So when Chris started telling me how as a trader he paid $150,000 for a pile of worthless junk, it was déjà vu. I could just as easily have been in a seedy bar in Bangkok talking to the expat trader sitting next to me.

After 10 years, I decided to return to the U.S.

Chris, on the other hand, decided it was high time somebody cleaned up the scrap business. With 12 years in the industry and experience developing trade platforms for waste and recycling companies, he had a pretty good idea of what was needed.

Chris wants to run at least 10% of it through the platform he has set up to buy and sell scrap.

He’s identified a huge need in a huge market. That’s a nice foundation for a startup company.

But how about the edifice on top of the foundation?

Scrap Connection wants to take much of the guesswork and risk out of the scrap business and replace them with transparency and hard data.

Does Chris’ platform get the job done? To become an irresistible tool that scrap traders can’t imagine doing without, it would need to hit pretty much all the major pain points for these recycling professionals.

Granted, that’s a high bar. But I’m not interested in a company that helps out traders here and there. I want a service that moves the needle… that puts the industry on an entirely new path…

Like what Airbnb’s platform is doing to the hotel industry. It’s now worth $30 billion.

Or what Uber’s platform is doing to the taxi industry. It’s now worth $68 billion.

Or what Intercontinental Exchange is doing to the commodity markets (among others). It’s now worth $35 billion.

Or what Alibaba’s platform is doing to the retail industry. It’s now worth $253 billion.

Of course, these companies are at the top of their class. It’s hard to do. And it doesn’t happen every day.

But it does show you what can happen when a well-thought-out platform meets a huge need.

Alibaba is probably the best example of this. So listen to what Chris said about the company…

“The reason I started Scrap Connection is because Alibaba failed the scrap business.”

Well, that took me by surprise.

I used Alibaba back in the day to source some green industrial glass from Vietnam and was quite satisfied with the information I got.

When I told Chris this, he said Alibaba has worked well across a lot of sectors, but scrap traders proceeded to do online via Alibaba what they did offline – lie and cheat.

“The only difference was it was easier to do it on Alibaba’s site,” Chris said.

“We make it as hard as we can for traders to misrepresent themselves or the deal they’re trying to transact,” he added.

Scrap Connection has built a platform that…

Pushing Back Against Fraud

And that’s just the beginning.

It also generates feedback from both buyers and sellers once a transaction is completed.

And it uses both the verification process and the feedback to provide members with a “reputation report” upon request.

Just as a buyer pulls a Dun and Bradstreet credit report on a supplier before making a big purchase, scrap traders would pull a Scrap Connection business intelligence report before pulling the trigger on a deal.

The report would give them critical information on whether the company sitting on the other side of the transaction consistently lives up to the terms of the contract, whether it pays on time, whether it ships on time, whether it grades its shipments (as a supplier) according to industry standards, whether it’s professional in its dealings… and so on.

These reports are shaping up to be big revenue producers for Scrap Connection. At $50 apiece and with average-sized members doing around 10 to 25 deals a month, the revenue generated would easily exceed monthly membership fees by several orders of magnitude.

As you can see, where other platforms are wrapping up what they provide to members, Scrap Connection is just beginning… 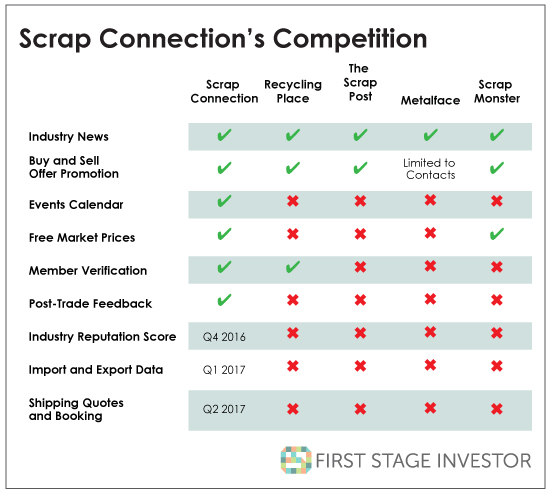 The company has 1,600 members. Trades on its platform so far total $10 million – a lot of it covering the busy U.K.-to-Pakistan route.

Scrap Connection, based in Amsterdam, plans to expand this year into routes originating in the Netherlands, then push into other Asian countries where the scrap business is big. (Taiwan, China and India are some big ones.)

✔ Market. The company is aiming for a 10% minimum share of an inefficient and fragmented $250 billion global market.

✔ Solution. This is comprehensive and well-thought-out.

✔ Monetization. The company will have several membership levels, a monthly and annual option, with several new products and services to be introduced this year and next.

✔ Competition. There are no clear threats currently.

✔ Traction. The company is still basically pre-traction, but it’s increased site traffic six times in the last two years just from word of mouth and social media. The company has shown the ability to capture large clients, such as HKS Metals (Netherlands), Ward Recycling and Mettalis Recycling (both U.K.). Beginning this year, the company will begin building recurring revenue through its membership fees and reputation reports.

✔ Capital efficiency. The company has low $8,000 to $10,000 monthly expenses (“burn rate”). That will increase this year and next year as the company goes from pre-traction to growing revenue in earnest. That said, we’re confident in its ability to keep overhead low.

✔ Scalability. This is pretty much built into the platform. Members are encouraged to invite their contacts, because the more contacts they give on Scrap Connection, the higher reputation scores they earn.

✔ Leadership. The founder and CEO, Chris Yerbey, runs a small five-person team. Born and educated in Alabama, he’s now based out of Amsterdam. I was unable to meet him, but we did have several phone conversations. As a 12-year industry veteran, he has deep knowledge of the scrap/waste/recycling business.

And Chris has got his finger on the pulse of this industry. He knows what traders need to conduct business efficiently. (By the way, I gave his platform a test run. It’s extremely user friendly.) As an entrepreneur, he’s also had several successful exits of companies he’s headed or played a leadership role in.

As you can see, all our main boxes are checked.

The fact that the industry is such a mess represents both an enormous opportunity and an enormous challenge. I’ve already commented on the opportunity.

In my view, it’s cultural – attacking an industry that’s freewheeling and playing loose with normal business rules and etiquette.

You can’t transform such a culture overnight. There will be resistance. Changes in behavior will come slowly. Especially when you consider it’s not only the cheaters who benefit from the status quo. It’s also the wily veterans who know the players… who know which companies to do business with and which companies to avoid.

Then again, at first people thought it was weird to summon taxis from their smartphones. That didn’t last long, did it?

Overall, I don’t expect the challenge to get in the way of the opportunity. Scrap Connection may be boring and unexciting to some, but that’s not how I see it.

To me, it’s a big opportunity ready for a solution using today’s technology.

Scrap Connection has a firm grip on that solution. And I don’t think it’s going to let go easily.

Minimum investment: $200
Security type: Future preferred stock via SAFE (An agreement that grants the holder the right to equity at a later date, typically when the company raises another significant round of funding)
Valuation: $4.5 million with a 15% discount
Industry: Business-to-business commerce
Raising up to: $300,000 (planned but not finalized) 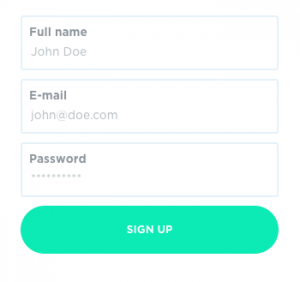 Enter the amount you want to invest. The minimum is $200, but you can invest more if you like.

Also note that the second option – sending a wire – doesn’t require you to give Wefunder your banking information. It remains in-house with your bank, if that matters to you.

Okay, ready to scroll down a little more? You’ll see this… 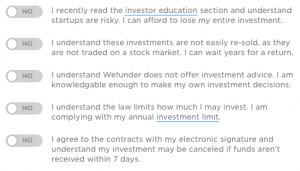 Please click on each one to turn the “No” into “Yes.” Once you do that, you can click “Invest.” You will now be guided through the remainder of the funds transfer process.

Note: There are limits on the amount that individuals can invest per year. (Full details on that here.) So, if you’re new to this, consider investing the minimum amount. There will be many more opportunities to come. Remember, it is ideal to spread your investments across 20-plus startups.

If you’re sending money from your account for the first time, it’s pretty easy. But the first time doing anything can be challenging. So be patient, and do not hesitate to call your bank if you have any questions.

How You Can Help

If you happen to know anyone in the scrap business, buyer or seller, send their contact details to Chris Yerbey at chris@scrapconnection.com.

At First Stage Investor, we try to add value to our portfolio companies. Of course, this step is optional.

Like all early-stage companies, there is a risk that the business won’t succeed. It could run out of money or fail to attract enough customers. While we’re confident in the company’s ability to execute, we don’t want you to invest any money you can’t afford to lose or will need in the near future (in this or any other startup).

In December 1903, Wilbur and Orville Wright made the first successful flight with a self-propelled craft. And while airplanes have become much more advanced since that first flight,…

New Pick: The Next Generation of Sports Fandom

As the popularity of hybrid work increases, office vacancies are becoming a major concern for building owners, cities and workers.  While some companies are encouraging employees…