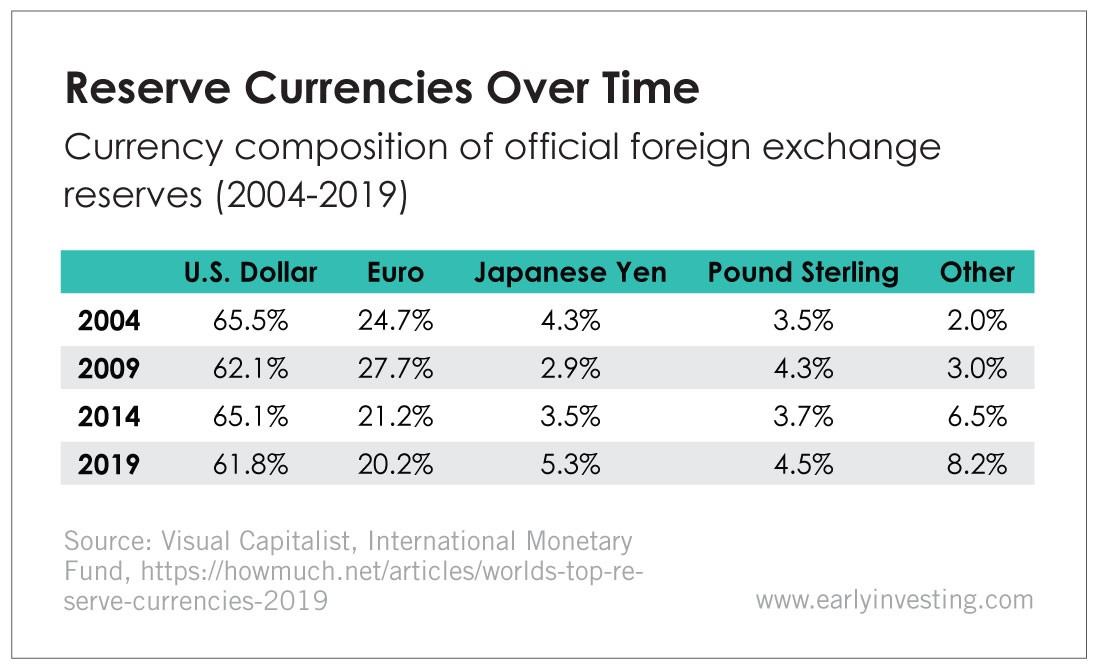 Today’s chart explores how foreign exchange reserves of the world’s most powerful currencies have changed over the years – particularly the dollar.

First, some background. In July 1944, delegates from 44 countries negotiated the Bretton Woods System. The system pegged the U.S. dollar to gold and other currencies to the U.S. dollar. It was designed to stabilize currency values to create a more efficient and conducive environment for global trade and finance.

Bretton Woods elevated the dollar to reserve currency status. But it was the “petrodollar” that cemented the dollar’s status as the dominant global reserve currency. The “petrodollar” emerged in the early 1970s, when then-President Richard Nixon announced the U.S. dollar would no longer be pegged to gold. Nixon feared ending the gold standard (along with growing debt and the costly Vietnam War) would hurt demand for the dollar. So the U.S. and Saudi Arabia struck a deal: The U.S. agreed to provide military protection for Saudi oil fields if Saudi Arabia standardized oil prices exclusively in dollars.

This oil agreement ensured the dollar would be the world’s dominant reserve currency. Most countries rely on imported oil, so they’re forced to hold large stockpiles of dollars to buy their oil. This creates consistent demand for the U.S. dollar, regardless of the U.S. economy’s health. (We’ll come back to this in a moment.)

Central banks hold dollars (along with a handful of other reserve currencies) for several reasons: to maintain a stable exchange rate of domestic currencies, ensure liquidity in case of a crisis, pay down debt, etc. And those bank reserves have fluctuated over the past 15 years. Which brings us to today’s chart.

Today, the dollar accounts for 61.8% of official foreign exchange reserves, far more than any other reserve currencies. The euro comes second with 20.2%, followed by the Japanese yen (5.3%), the pound sterling (4.5%) and other currencies (8.2%). The other category includes the Chinese renminbi, the Swiss franc, the Canadian dollar and the Australian dollar.

This year, the dollar has dropped to its lowest reserve percentage in 15 years, while the “other” category has risen to its highest. This isn’t necessarily proof that the dollar’s empire is crumbling. The dollar is still top dog – for now. But that could change.

U.S. national debt has grown to more than $22 trillion. And China’s yuan has been strengthening against the dollar amid trade war tensions.

It’s hard to see exactly what the future holds for the dollar. But losing its top reserve currency status is a very real possibility down the road. As our own Adam Sharp writes:

If the dollar were ever dethroned as the unrivaled global currency, the effects would be dramatic and would almost certainly inflict a great deal of inflation on U.S. citizens.

Unfortunately, this outcome is looking increasingly likely in the long term. It could take decades to play out, but it’s something every investor should at least be aware of.

China’s yuan is the primary challenger to the dollar today. But the real risk is that the world will lose faith in the dollar and start using alternatives broadly.