In April 2019, Bloomberg Businessweek magazine’s cover story asked “Is Inflation Dead?” The subtitle accompanying it was “Did Capitalism Kill Inflation?”

I recall thinking at the time that this story was probably a contrarian indicator. It reminded me that nearly everyone in the financial world was ignoring the threat of inflation.

It also has similarities to an infamous BusinessWeek cover story from 1979 titled “The Death of Equities.” Stocks had performed miserably for a long time, and everyone was convinced that performance would continue to be horrible. But it actually marked the beginning of one of the greatest long-term bull markets. 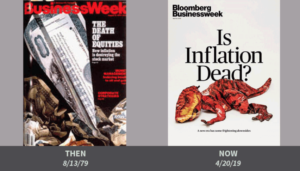 Today, inflation is starting to become more of a widespread concern. I detailed some of the latest signs in a recent article. And I recommend that all investors start hedging against the threat of inflation.

My strategy against inflation is straightforward. There are basically four aspects to it.

Let’s briefly go through each.

I remain extremely bullish on gold and silver as well as quality companies that mine them. Realization about rising inflation is slowly setting in with some people — but most investors still have near-zero exposure to precious metals.

As governments around the world continue to print unimaginable amounts of money and interest rates stay at rock-bottom levels, I believe demand for gold and silver as investments will soar. I think people are still underestimating the scale and length of what’s coming.

Bitcoin is the only cryptocurrency I consider to be a viable inflation hedge. It’s a scarce, speculative store of value. Needless to say, it’s a lot riskier than gold and silver. But it also has much more upside.

Bitcoin is a bet on continued reckless government spending and monetary policy. I still like that bet. See my recent article for more details on why I think bitcoin is an excellent hedge.

If the U.S. dollar declines against foreign currencies, it may benefit investors to own stocks in foreign countries. Because the revenue of foreign companies is in a different currency, owning stock provides investors with exposure to the value of that currency. If the currency goes up against the dollar, the value of the investment will rise (approximately) the same amount.

Startup investments have an incredible amount of upside. If you invest in a company when it’s worth $10 million and its value grows to $1 billion in five or so years, that’s quite a return. It’s one of the few asset classes that has the potential to outperform significant annual inflation.

Needless to say, startup investing is risky. And it takes a while to get good at. So start out with small investments and be selective! I recommend going for companies with significant traction, at least at first. It’s the most reliable signal there is.