For a while now, it’s been clear that the Fed wants higher inflation.

Now it’s finally starting to admit it. Here’s an excerpt from CNBC’s article this week titled “The Fed is expected to make a major commitment to ramping up inflation soon:”

“In the next few months, the Federal Reserve will be solidifying a policy outline that would commit it to low rates for years as it pursues an agenda of higher inflation and a return to the full employment picture that vanished as the coronavirus pandemic hit.

Recent statements from Fed officials and analysis from market veterans and economists point to a move to “average inflation” targeting in which inflation above the central bank’s usual 2% target would be tolerated and even desired.”

In essence, the Fed is arguing that because inflation has been so low over the past decade or so, they can “make up” for those lost price increases going forward.

The Fed’s justification for higher inflation is shaky at best. Here’s how CNBC explains it.

“The Fed and other global central banks have been trying to gin up inflation for years under the reasoning that a low level of price appreciation is healthy for a growing economy.”

So the “official” explanation is that higher inflation is good for the economy. Seems strange, doesn’t it? Higher prices are horrible for the average person. It’s an invisible tax that erodes savings and hampers financial performance.

But inflation does have one very specific “benefit” for the economy. Inflation will help wipe away the huge amounts of debt we’ve built up over the last few decades. It will help corporations, governments, and individuals who borrowed too much deal with their debt problems.

I think that’s the real reason they want more inflation.

The big question is this: can the Fed achieve the level of inflation it desires? Many investors are skeptical that they can. Just one year ago, the cover story for Bloomberg Businessweek was “Is Inflation Dead?” 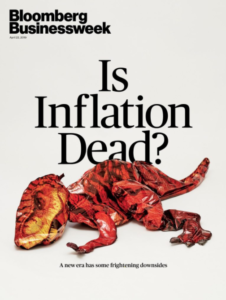 The Economist ran a similar article last year — subtitled “The end of inflation?” — which seemed to argue that inflation used to be a problem, but is no longer relevant today.

The problem is that analyses like these rely on official inflation data. But many of us believe that inflation today is much higher than official Bureau of Labor Statistics numbers say. John Williams, an econ PhD who operates ShadowStats.com, offers an alternative measure of inflation. He simply uses the same methodologies that the U.S. government did in 1980 and 1990. His 1980-based measure shows inflation could be as high as 8% today. And the 1990-based version shows around 4% annual inflation.

The measuring stick the government uses for inflation has changed a lot over the past decades. And every change seems to only result in lower numbers.   In my view, it’s likely that inflation is already far too high. Just take a look at the long-term rise in healthcare costs, education and housing. Inflation is all around us.

Another thing we have to account for is the current trade war with China. Cheap imports from China have helped keep prices down significantly. If the trade spat continues to escalate, consumer prices will likely rise.

So yes, I believe the Fed has already succeeded in creating significant inflation. And it’s now openly discussing plans to make it even higher.

The investment world is slowly reacting to these trends. That’s why gold just hit an all-time high over $2,000 and silver is up 58% this year. It’s almost certainly why bitcoin is breaking out and is currently trading at close to $11,900.

Loose monetary policy by the Fed and other central banks is what’s driving these assets higher. I believe it will continue for 10 years — maybe longer. This is why I’ve been pounding the table on precious metals and other alternatives. There are no other investments in the world with such a strong fundamental bull case.

I expect these assets will continue to outperform for years to come. This is not some quick trade for me. It’s a 5-to-10 year plan. I don’t think the Fed will be able to raise rates — or stop printing money — for at least that long.

So while precious metals and bitcoin have done quite well over the last year, I think we’re just getting started. Needless to say, there will be dips (buying opportunities) along the way. But I’m betting that the trend remains higher for years to come.