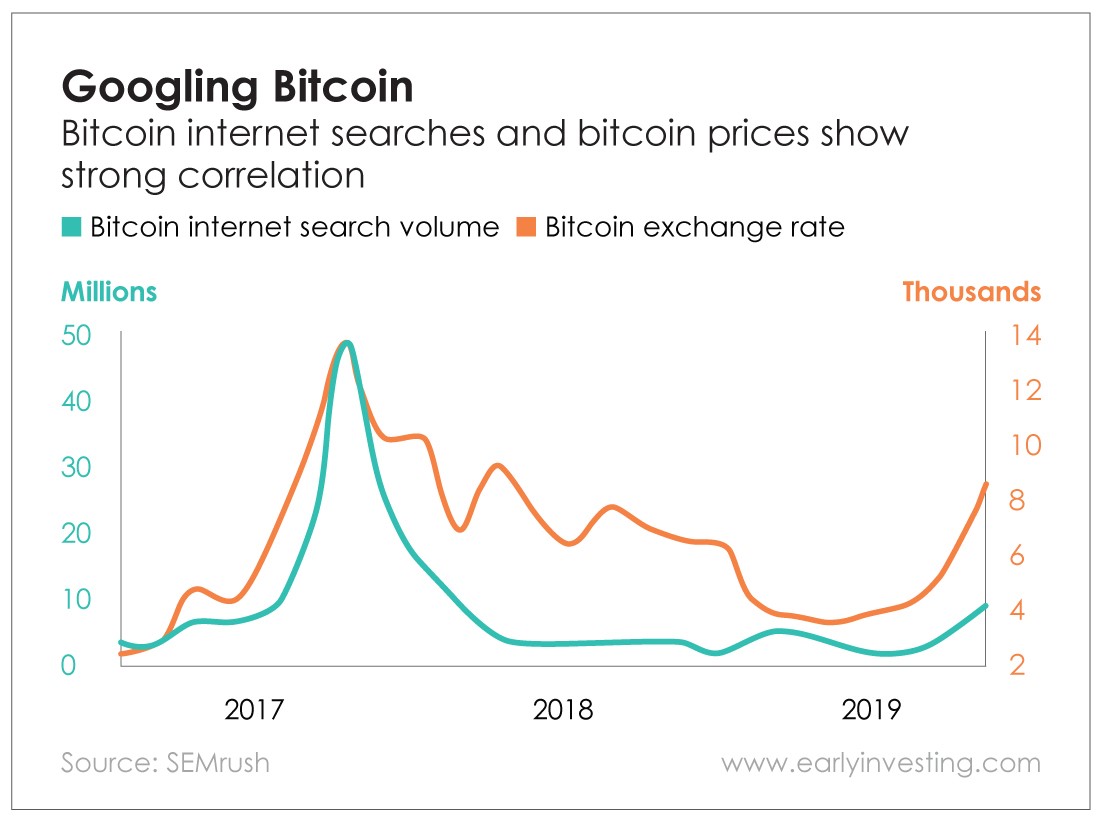 Bitcoin internet searches are up… along with the price of bitcoin.

Marketing analytics company SEMrush has identified an 80.8% correlation ratio between bitcoin Google searches and the bitcoin price between June 19 and June 26. SEMrush also found there was a strong correlation in 2017, when bitcoin was skyrocketing by around 1,500%.

The correlation has some wondering which came first: the searches or the price spikes. But before we get into that, we should talk about the difference between correlation and causation.

Correlation measures how two variables move in relation to each other. Causation indicates a cause and effect – that one event is the result of the other.

As for the price spikes, they likely have more to do with FOMO (fear of missing out) than with Google searches. Adam Sharp pointed out on Friday that bitcoin is going through a dramatic growth period. There have been small pullbacks along the way, but the overall trend is going up. And when that growth happens, FOMO grips the markets. So investors have been getting into the market and pushing up prices.

As for bitcoin Google searches, it makes sense that as the price goes up, interest in the asset goes up. That’s just the way Google searches function. Bitcoin searches could also be buoyed by an adjacent interest in Facebook’s new Libra currency. Libra will not function as a bitcoin competitor since it’s tied to a basket of fiat currencies. In fact, it could actually help boost bitcoin’s price and accelerate the mainstreaming of cryptocurrency in general. But Facebook is the third most trafficked site in the world. So it makes sense that its crypto project – which involves a number of hefty backers, including Visa, PayPal, Coinbase and eBay – would boost bitcoin interest.

Also interesting is what bitcoin is not correlated to. Andy Gordon was the first to research and conclude that bitcoin is a great portfolio diversifier precisely because it doesn’t correlate with U.S. stocks. So when stocks tank, your bitcoin holdings won’t go down with them.

Just goes to show that price spikes and Google searches aren’t the only reasons to hold on to bitcoin.