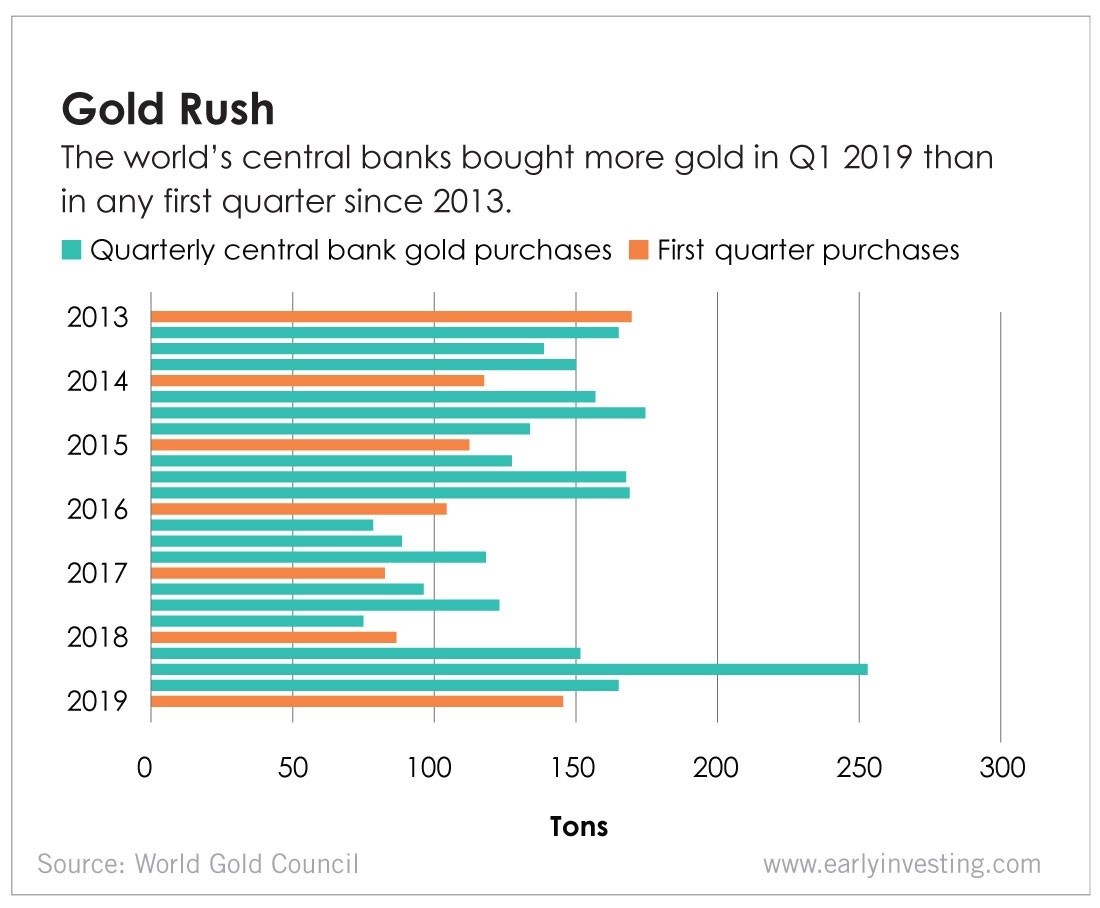 Russia and China led the buying spree, with Russia snapping up 55.3 tons and China purchasing 33 tons. Monthly purchases from the People’s Bank of China have averaged 11 tons over the past four months.

The World Gold Council said the same reasons for gold buying in 2018 motivated banks in this quarter.

“Economic uncertainty caused by trade tensions, sluggish growth and a low/negative interest rate environment continued to weigh heavy on reserve managers’ minds. And geopolitics still cause consternation. In the face of these challenges, central banks continued to accumulate gold,” the Council wrote.

These countries are clearly looking to reduce their dependence on the dollar. In fact, Russia has come out and said as much.

“No one currency should dominate the market because this makes all of us dependent on the economic situation in the country that issues this reserve currency, even when we are talking about a strong economy such as the United States,” Russian Prime Minister Dmitry Medvedev said late last year. “I want to say something that may raise a few eyebrows, but I think some of these [U.S.] sanctions are good or useful because they forced us to do what we should have done 10 years ago.”

Adam Sharp thinks this is a hint that Russia and other countries will eventually return to a gold standard once fiat goes belly up worldwide.

“China and Russia in particular. They will probably eventually try to replace the dollar with their own gold-backed currencies,” Adam said.

In a world with runaway debt and excessive money printing, returning to the gold standard seems hard to imagine. But, Adam points out, that’s not because of gold.

“The gold standard seems ridiculous and impossible today, but that’s because fiat is that out of control,” he said.

We’re not the only ones who think fiat has run off the rails. Berkshire Hathaway Vice Chairman Charlie Munger recently warned against unbridled money printing:

I am so afraid of a democracy getting the idea that you can just print money to solve all problems. Eventually I know that will fail. You don’t have to raise taxes, you just print… In the end, if you end up printing too much, you end up like Venezuela.

Munger added that the U.S.’s situation is nowhere near as dire as Venezuela’s, but his concern still stands.

With government, corporate and personal debt all rising – and little appetite to deal with the consequences – fiat money is on shaky ground. It’s not going to fail right away. But it will at some point unless we change our ways. So it just makes sense to invest in an alternative to the current system.

Gold is the traditional shelter from fiat. But we believe crypto is a much better alternative. It provides shelter from the crumbling fiat system. It’s finite, programmable cash. It’s continuing to improve. It’s built for modern times. And the time to invest is now, while it’s still early.