San Francisco’s Golden Gate Bridge was completed in 1937 after just four years of construction. Here’s a picture of the “ribbon cutting” ceremony. 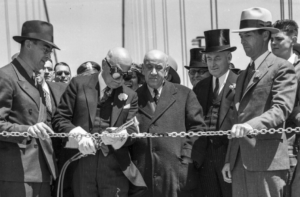 Contrast this with today, when San Francisco government officials just celebrated the reopening of a new bathroom at a train station after 20 years by cutting a toilet paper ribbon with their fingers. 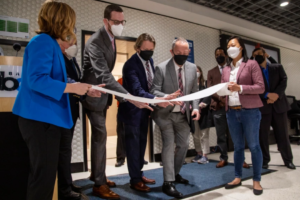 I use this example because the contrast between the images is just incredible. Four years to build one of the greatest structures in history and 20 to reopen a bathroom in a busy train station?

Apparently after September 11, many train station bathrooms closed for security reasons, and they simply never opened back up. Imagine all the… unfortunate incidents that surely occured in 20 years’ time due to the lack of nearby facilities.

How could this have happened in one of the richest cities on the planet? The only explanation that makes any sense is the widespread existence of totally dysfunctional yet entrenched bureaucracies. I follow a lot of venture capitalists on Twitter who live in San Francisco, and they are getting to the point of outrage over local government incompetence. Many have left for Miami or Texas already.

That incompetence seems to be the norm in government today across most of the political spectrum — at state, local and federal levels.

So when I hear that the government and central bank are building their own digital version of the dollar in the form of a central bank digital currency (CBDC)… I shudder a bit.

Governments and central banks around the world are racing to make new digitally native versions of their currencies. For some reason they seem to love the massive increase in power a CBDC could give them.

But can a centralized, hierarchical central bank actually make a useful and secure digital currency? We don’t know yet. The Fed is working on one, but it hasn’t revealed many details yet.

In early January 2022, the Fed released a paper called “Money and Payments: The U.S. Dollar in the Age of Digital Transformation” (PDF).

Here’s my interpretation of the big points in the paper. The Fed…

As Nic Carter said on Twitter last year, most central banks — including the Fed — are basically at the “overambitious whitepaper stage” of their CBDC projects.

So it seems like we’re probably a ways out from a U.S. CBDC. But there is a chance that the rollout could get rushed, and officials could push it out before it’s really ready. And if it isn’t ready for prime time, that could be bad.

So aside from the potential technical issues, CBDCs present a lot of other dangers. In essence, the Fed or government would be able to observe and track every transaction and tie it to a real person.

More worryingly, they could shut down any account for any reason. Maybe it’s “spreading misinformation,” attending the wrong protest, or committing wrongthink. These are legitimate concerns. My friend was recently denied a mortgage loan because his collateral was his stock portfolio, and he owned weed stocks. That is simply discriminatory behavior. And it would likely continue to get worse with a CBDC.

And just because CBDCs are digitally native currencies doesn’t mean they won’t be inflationary. They would make it even easier for the government to print money.

Instead of cutting physical stimulus checks, the government could just deposit them directly in each person’s verified CBDC wallet. It would enable simple implementation of universal basic income.

So CBDCs aren’t a threat to bitcoin. Bitcoin is a totally different animal. It’s already battle-tested, decentralized and has a growing user base.

And of course, it is scarce. With a limited supply of 21 million coins and a 1.5% current inflation rate, bitcoin will continue to stand out from fiat currencies, digital or analog.

While CBDCs pose no danger to bitcoin, they are a threat in other ways that we should be aware of.

The Silver Lining of the FTX Collapse

The bad news about FTX just keeps coming. Sam Bankman-Fried, or SBF, told CNBC he is still trying to lock down a multibillion-dollar deal to bail out his…

According to Ray Dalio — owner of the largest hedge fund in the world — the Eurozone is in trouble. The Eurozone comprises 19 countries, including Spain, France…

FTX and the Crypto Regulations Still to Come

It’s been a crazy couple of weeks in the crypto market as it tries to sort through the fallout of crypto exchange FTX filing for bankruptcy. For a…