Precious metals isn’t a topic we discuss much here. But I simply couldn’t resist today. The outlook for gold and silver is just too good, and it’s getting better.

To me, the fundamental bullish case for precious metals is simple. Governments, people and businesses around the world have big piles of unpayable debt. And, unfortunately, most of the borrowed money isn’t being spent productively.

We’ve reached the stage where countries and companies are borrowing at an accelerated rate just to pay the interest on their debt. Look how extreme it’s gotten. This chart shows global debt as a percentage of gross domestic product (GDP) since 1950. 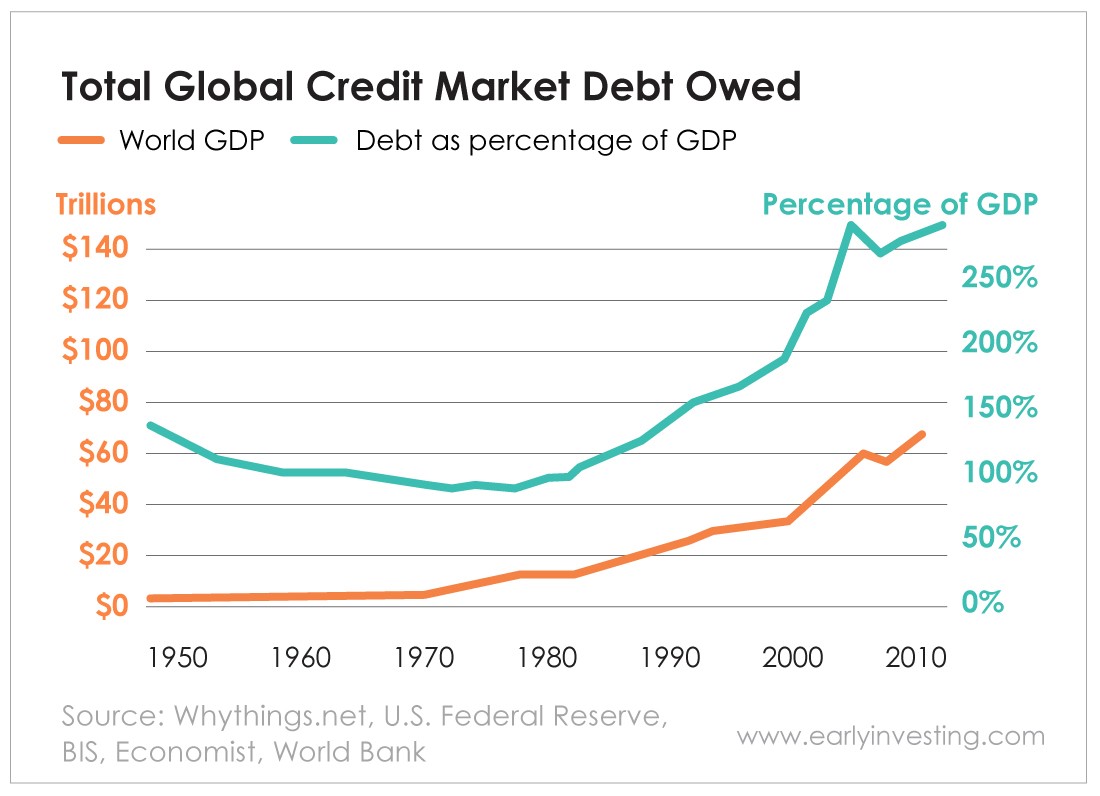 It’s pretty obvious to me how the powers that be are going to handle this mess. They’ll use Modern Monetary Theory, debt monetization, currency devaluations, a debt jubilee or some other crazy scheme to try and get out of trouble. Let’s simplify things and just refer to it as “printing money.”

And the crazy stuff is already happening. There are already $17 trillion worth of negative-yielding bonds in the world! That’s madness. And many expect part of the massive ($40 trillion) U.S. bond market to soon follow suit.

To put it mildly, gold should do well in this environment. Gold is not just a “shiny rock.” It’s a very special metal with a long history of serving as a “store of value.” It doesn’t corrode, it’s rare, it’s beautiful and it’s very useful in electronics. There’s nothing else quite like it.

Gold prices tend to rise as debt does. Take a look at the correlation shown here between the gold price and U.S. federal debt since 2003. 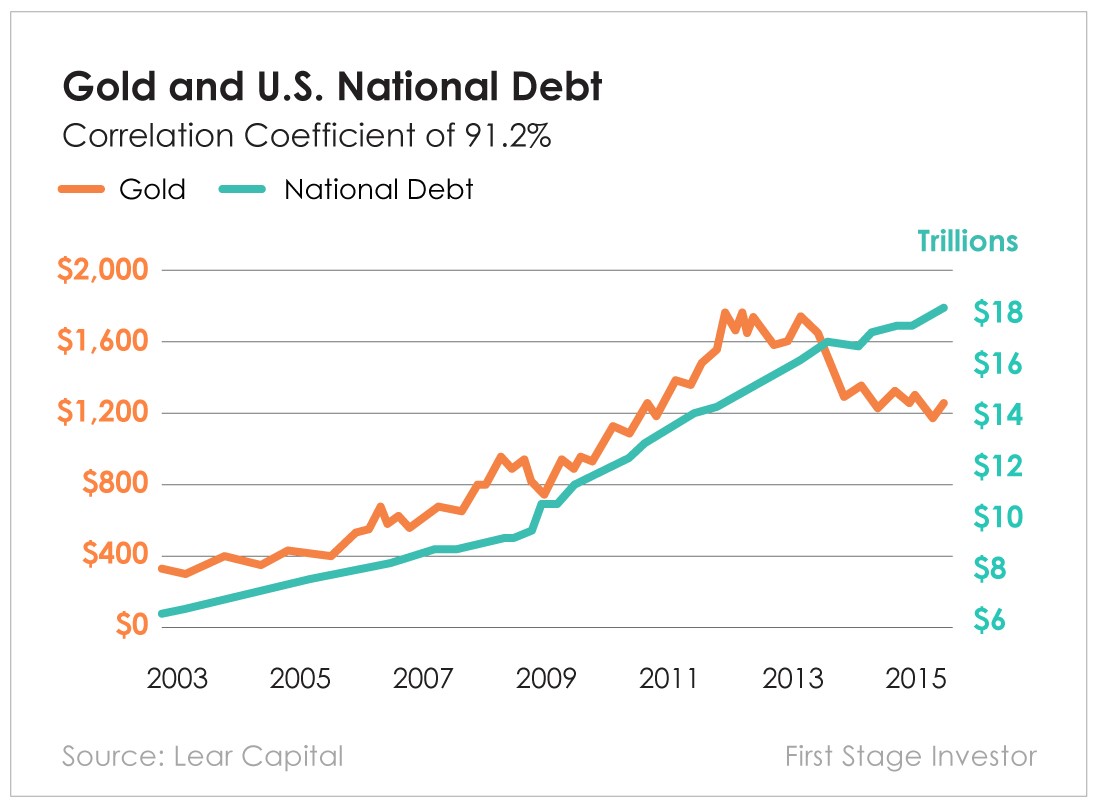 That’s a 91% correlation coefficient. It makes sense, because as debt levels rise, the chance of a financial crisis goes up. Gold and debt went up virtually together until around late 2013. I can’t explain why gold has “underperformed” compared with debt since then, but I don’t expect this will last forever. It looks like a heck of a buying opportunity to me.

Gold is already starting to rise. And I believe we could go a lot further based on the amount of debt that’s headed our way.

We’ve started to see some seriously worrying signs in the banking sector recently. This whole “repo” disaster is not a good sign. If you want to understand what’s really going on here, I highly recommend reading Caitlin Long’s amazing article about it.

Basically, the repo rate is the (annual) rate that banks charge each other to borrow money overnight. The rate is typically very low, 2% or so, because supposedly all the transactions are backed by U.S. Treasurys.

As Caitlin Long points out, the problem is that for every U.S. Treasury in the system, two or three banks claim to own the same bond. This is known as “rehypothecation.”

For every U.S. Treasury security outstanding, roughly three parties believe they own it. That’s right. Multiple parties report that they own the very same asset, when only one of them truly does. To wit, the IMF has estimated that the same collateral was reused 2.2 times in 2018, which means both the original owner plus 2.2 subsequent re-users believe they own the same collateral (often a U.S. Treasury security).

Her conclusion is the most disturbing part of all.

What it all means is that, while each bank’s financial statements show the bank is solvent, the financial system as a whole isn’t. And no one really knows how much double-, triple-, quadruple-, etc. counting of U.S. Treasuries takes place.

We are entering what could be a very chaotic financial period. Gold is known for holding its value, or even rising in value, during such periods.

Lastly, as U.S. Global Investors CEO Frank Holmes pointed out in a recent article, inflation is also starting to pick up.

“Core” consumer prices – which exclude volatile food and energy prices – rose to an 11-year high of 2.4 percent growth year-on-year. Not since September 2008 have prices expanded so fast.

Gold and silver both look very promising here. They’ve underperformed for so long, and the fundamental outlook for them looks quite strong. I believe every investor should have at least a little exposure to precious metals. There’s no other hedge quite like it.