Long-time readers know I’m always bullish on bitcoin over the long-term. But recently I’ve become extremely bullish over the short- and mid-term. Let me tell you why.

On October 7th, Square — a publicly-traded $82 billion financial giant — announced that they purchased $50 million worth of bitcoin for their treasury. Here’s a juicy snippet from Square’s press release.

“We believe that bitcoin has the potential to be a more ubiquitous currency in the future,” said Square’s Chief Financial Officer, Amrita Ahuja. “As it grows in adoption, we intend to learn and participate in a disciplined way. For a company that is building products based on a more inclusive future, this investment is a step on that journey.”

Square didn’t buy this bitcoin to sell it to customers (although they do that). Square bought bitcoin as a reserve asset — or store-of-value. I suspect it’s a fiat currency hedge. And a potentially lucrative alternative to Treasury bonds and bills, which basically yield nothing today. This is a huge vote of confidence for crypto, as even JP Morgan acknowledges.

The 4,709 Bitcoins now make up around 1% of Square’s total assets. That may not seem like a lot, but Square is a huge business. And I suspect it’ll add more. Twitter founder and CEO Jack Dorsey is a huge proponent of bitcoin. In 2019 he told a newspaper, “I think the internet will have a native currency and anything we can do to make that happen we’ll do.”

Square is an increasingly dominant player in finance. It processes a very large chunk of credit card purchases and is becoming a very large lender to small businesses. Plus, its Cash App is used by 30 million people to transfer money and buy bitcoin. It’s one of the biggest and best players in financial innovation worldwide.

And Square isn’t alone in adding bitcoin to its balance sheet. Microstrategy, a $1.6 billion publicly-traded company, went much further in its bitcoin purchases. So far it has bought $450 million of Bitcoin as a “treasury asset.” That’s more than a quarter of the company’s total value (based on market cap).

Publicly-traded companies now own at least $7 billion dollars worth of bitcoin. And the biggest of them all is GBTC, the Grayscale Bitcoin Investment Trust.

GBTC Is Gobbling Up 77% of New Bitcoin

Next up, we have to go over what’s happening with the Grayscale Bitcoin Trust (ticker: GBTC). It’s a publicly-traded bitcoin investment vehicle with more than $5 billion in BTC. GBTC is only available to accredited and institutional investors.

In Q2 and Q3 of 2020, professional investors absolutely gobbled up shares of GBTC and other bitcoin investment products offered by Grayscale. The firm just announced a record-breaking $1 billion of asset inflows in Q3. That’s its third record-breaking month in a row. Killing it.

It’s gotten so extreme that GBTC alone is buying the equivalent of 77% of ALL newly-mined coins! I can’t overstate how important this is. More than three-quarters of all new bitcoin supply is going to institutional and accredited investors — just through GBTC. Take a look at this chart from the new Grayscale report. 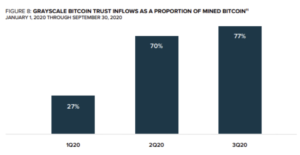 GBTC is a very inefficient way to own bitcoin. It trades at a premium to the cost of actual bitcoin. But due to rules regulating the types of assets they can buy, it’s the only thing many institutions can legally purchase that has direct exposure to bitcoin.

These guys want exposure to bitcoin. Badly. And eventually, many will change their rules to allow direct ownership of crypto. We have to remember that it often takes years to change the rules at a big financial firm. I suspect those internal rules — which make it hard to own bitcoin — are already in the process of being changed at many firms.

If bitcoin continues to perform well, I foresee institutional FOMO — fear of missing out — in the cards. Those who don’t own bitcoin for their clients or shareholders will fall behind in performance. And that will make many decide to jump on board.

Fidelity Digital Assets just put out a new report subtitled: “Bitcoin’s Role as an Alternative Asset.” Here’s my favorite takeaway — the report’s author, Ria Bhutoria, shows how a traditional 60/40 portfolio (60% stocks, 40% bonds) would perform compared to very similar portfolios that own a small amount of bitcoin (1%, 2%, 3%). 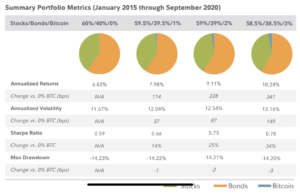 This is a very convincing data point among dozens made in Fidelity’s new report. It’s big news.

The report makes a convincing case for adding Bitcoin to all portfolios. And it will be read by many sophisticated and powerful investors. It is 29 pages of serious research — I recommend reading it in full.

It May Be Happening

Bitcoin is in a very nice place right now. The world’s money managers are desperate for alternative investments due to the strange situation in bonds and very highly valued stocks.

The macro environment couldn’t be “better” for bitcoin. Gigantic deficits, extreme money printing and no end in sight… I expect the trend to continue.

I’m more bullish on bitcoin than I’ve been in a long time. I think the setup could be comparable to when I wrote “It’s Bitcoin’s Time to Shine” in August 2017, as Bitcoin traded around $2,200. Of course, there is a risk that if stocks go down sharply, crypto could also see a big dip over the short-term. But hey, there’s risk everywhere. And I like the odds here with BTC.

I think bitcoin has a good chance of hitting $40k within the next 18 months.