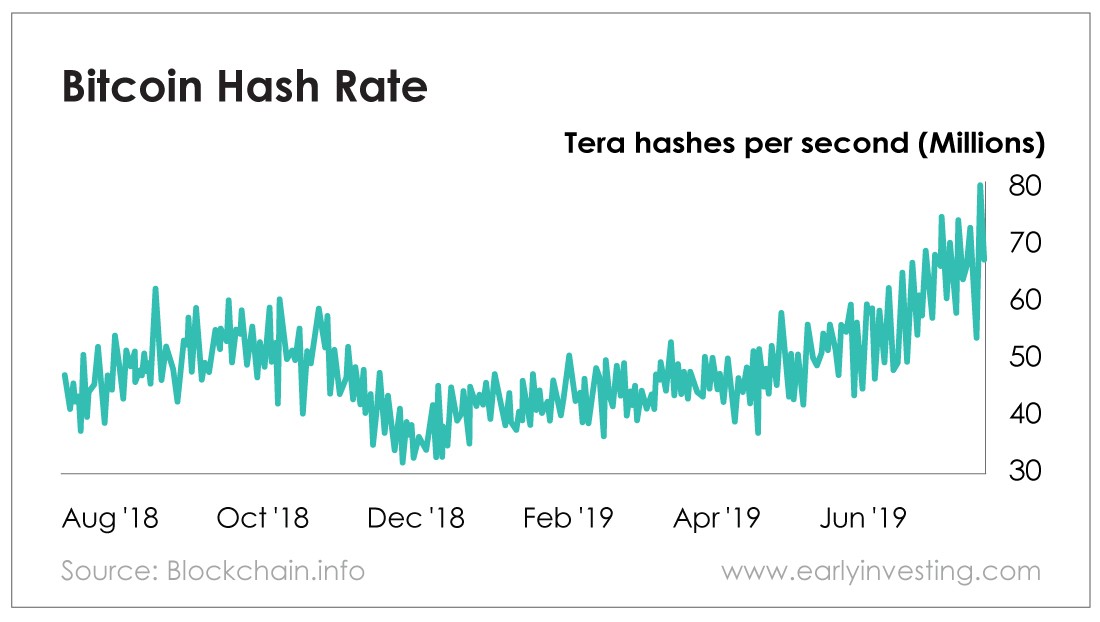 This past Saturday, bitcoin reached a new milestone. The bitcoin hash rate – the measuring unit of the network’s processing power – reached an all-time high of 79 million tera hashes per second.

To understand why this is a significant milestone, we need to explore two things:

Bitcoin’s hash rate is widely accepted as an indicator of how strong bitcoin’s security has become. It essentially reflects the speed and computing power needed to mine bitcoin. The harder it is to mine bitcoin (which is basically solving superhard mathematical problems), the more computing or hash power you need.

Bitcoin miners perform a similar function that a central authority like Visa does for fiat users. They record transactions and check them for accuracy to prevent fraudulent activity like “double spending,” where someone tries to spend the same bitcoin twice. But unlike Visa, bitcoin miners are not centralized. They’re spread out across millions of computers across the world. This way, the network has no single point of failure. The more miners who mine, the more secure the network.

Bitcoin mining has become more difficult than ever. This shows that despite a brutal recent bear market, there’s an increasing level of activity on the bitcoin network. And the high level of difficulty means the network is more secure than ever.

The hash rate’s growth hasn’t been a perfectly smooth climb. But the processing power will only keep growing.

One big reason for that is the bitcoin halving, which is coming up in May 2020. Bitcoin halvings historically boost bitcoin’s price, so miners will be more motivated than ever to mine for bitcoin. And because their rewards for mining will be cut in half after the halving, competition among miners will likely grow, which means there will be more miners to verify transactions and keep the network secure.