Bitcoin enthusiasts often use “digital gold” as a metaphor to describe bitcoin. I like this metaphor, but it only scratches the surface of what bitcoin really is.

It is a payment network with its own currency. Nobody owns the network because it is decentralized, spread out over tens of thousands of computers all over the world.

Many of us believe the world needs a decentralized currency because the fiat money systems used around the world today aren’t sustainable. And history shows us that fiat money almost always eventually becomes worthless, as it encourages deficit spending and debt issuance.

Satoshi Nakamoto also didn’t like the current fiat monetary system. He wanted a sound alternative, so he built bitcoin. (Satoshi is no longer involved in the project, but hundreds of volunteers have taken up work on it.)

It turns out Satoshi was right. The world does need an alternative, and people are already using it as such in places like Argentina and Venezuela. Argentina’s inflation rate ran very hot at 47% in 2018. That is devastating to citizens’ savings. 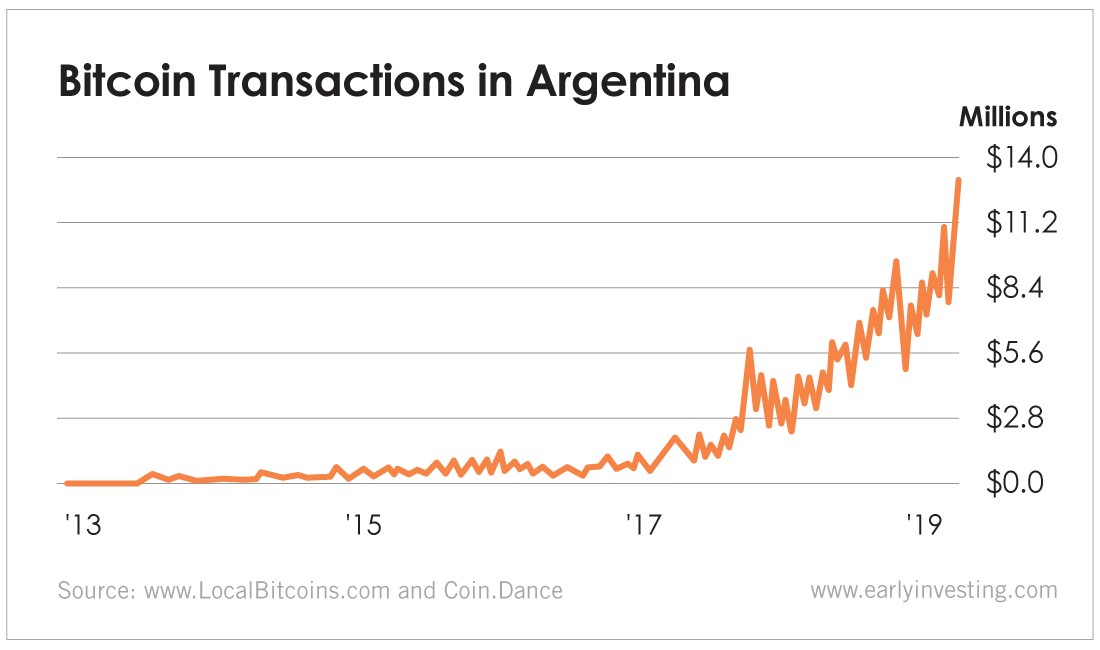 Those are just the in-person trades conducted through a single website. Argentina has a large and thriving bitcoin community due to its long-suffering currency problems. The New York Times reported on it as far back as 2015, when it highlighted Argentine businesses using bitcoin to pay vendors in the U.S. Those Argentines who held on to their bitcoin have done incredibly well, while those who kept funds in the local currency have been crushed.

Just recently, The New York Times published a powerful opinion piece by a Venezuelan citizen titled, “Bitcoin Has Saved My Family.” The subhead reads, “‘Borderless money’ is more than a buzzword when you live in a collapsing economy and a collapsing dictatorship.”

I keep all of my money in bitcoin. Keeping it in bolívars would be financial suicide: The last time I checked, the rate of daily inflation was around 3.5 percent. That’s daily inflation; the annual inflation rate for 2018 was almost 1.7 million percent. I don’t have a bank account abroad, and with Venezuela’s currency controls, there’s no easy way for me to use a conventional foreign currency like American dollars.

People in countries like Argentina and Venezuela need a way to store and transfer value (money), and the local currency doesn’t provide it. As more fiat money is printed, its value goes only one way: down.

Bitcoin may be volatile, but it does tend to go up over time. Given a choice between the two ways to store value, many people are choosing bitcoin, the one with a potential to make money.

This is why bitcoin was created. It has reached a milestone and emerged as an alternative store of value. People turn to it when the local currency fails.

Because of this, I believe bitcoin makes an excellent hedge against monetary crisis. And I’d say it’s a good bet that there will be plenty of monetary chaos over the next 10 years, as the world struggles with record debt levels and low interest rates.

People all over the world want digital alternatives to fiat, and right now bitcoin has a big lead on all the competition. It has a strong network effect and the best security track record by a mile.

I believe we’ve seen the bottom in bitcoin prices for this cycle, and they are headed higher. With the bitcoin halving coming up in May 2020, half as much new bitcoin will be coming on the market through miners. I believe the bitcoin hoarding in anticipation of this event may have already begun. The first two halvings, in 2012 and 2016, were very bullish catalysts.

It will not be a smooth ride. But I suspect it’ll be worth the trouble.

Have a great weekend, everyone.