“There was only one catch and that was Catch-22, which specified that a concern for one’s safety in the face of dangers that were real and immediate was the process of a rational mind. Orr was crazy and could be grounded. All he had to do was ask; and as soon as he did, he would no longer be crazy and would have to fly more missions. Orr would be crazy to fly more missions and sane if he didn’t, but if he was sane he had to fly them…

Binance is barring American investors from using its exchange, effective September 12. After that date, U.S. users will be unable to deposit funds to the site or make trades. Binance says investors will still have access to funds on Binance after that date.

This is an enormous inconvenience for the majority of altcoin investors in the U.S.

Binance processes about $1.6 billion worth of cryptocurrency transactions a day. And about 15% of Binance’s traffic comes from the U.S.

But I can’t be mad at Binance.

In order to help Americans trade crypto in the long haul, Binance has to kick them out of the club in the short run.

If Binance didn’t shutter its U.S. operations now, regulators would shut them down in the near future, most likely with less notice and fewer options than users have now. And that would hamper Binance’s current efforts to launch a regulated crypto exchange in the U.S.

So Binance did the only thing it could do. It put its American customers first by reducing their number to zero. It’s the only sure way for Binance to grow its cryptocurrency services in the U.S.

If this makes absolutely no sense to you, that’s one of the hallmarks of a Catch-22, made famous by Joseph Heller’s 1961 modern classic of the same name. A Catch-22 is where logic enters a carnival hall of mirrors.

I remember reading it in the mid-1960s. Heller made your head spin. It was somehow hilarious and incredibly depressing at the same time. The original Catch-22 movie – based on the book – is fantastic. But the Hulu Catch-22 series is lukewarm at best.

And this is a classic Catch-22 situation. Let’s follow the paradoxical logic…

Binance was facing regulatory dangers that were real and immediate – namely KYC (know your customer) and AML (anti-money laundering) concerns, and U.S. securities laws. Binance offers dozens of altcoins. And it’s quite possible (I’d say probable) that the Securities and Exchange Commission (SEC) would consider a bunch of them securities. The SEC could even view Binance’s own native BNB crypto token as a security.

The SEC continues to keep folks guessing as to when guidelines will be issued and what they’ll look like. But it has made clear for well over a year that it considers the vast majority of nonregistered crypto exchanges to be on the wrong side of the law.

In other words, Binance knew this day was coming. It knew it had to launch a regulated exchange eventually. But Binance couldn’t afford to stay on the sidelines waiting for regulatory clarity while other exchanges developed a loyal U.S. following. If it waited, it would become Taxi Magic, not Uber. Catch-22.

Binance, and its American customers, are now paying the price for this strategy. At some yet unknown point in the future, it will launch a completely legal fiat-to-crypto U.S. exchange (called Binance.US) with a U.S. Treasury Financial Crimes Enforcement Network (FinCEN)-registered partner. But until that exchange is launched, American crypto traders have lost their go-to platform for altcoins.

There are other options, though, for individual, nonprofessional traders. KuCoin allows its users to sign up for a limited account without KYC (identity verification). But it limits trading (and withdrawals) in these accounts to two bitcoin per day. That would allow less than $20,000 worth of transactions daily. While not ideal, it’s certainly better than nothing. And investors can trade a fairly wide variety of altcoins there.

Binance users can also transfer their Binance-held coins to several exchanges that are legally compliant in the U.S., including Coinbase, Bittrex, Poloniex, Kraken, Huobi and eToro. But your trading options will be more limited than they would be on Binance (or KuCoin). 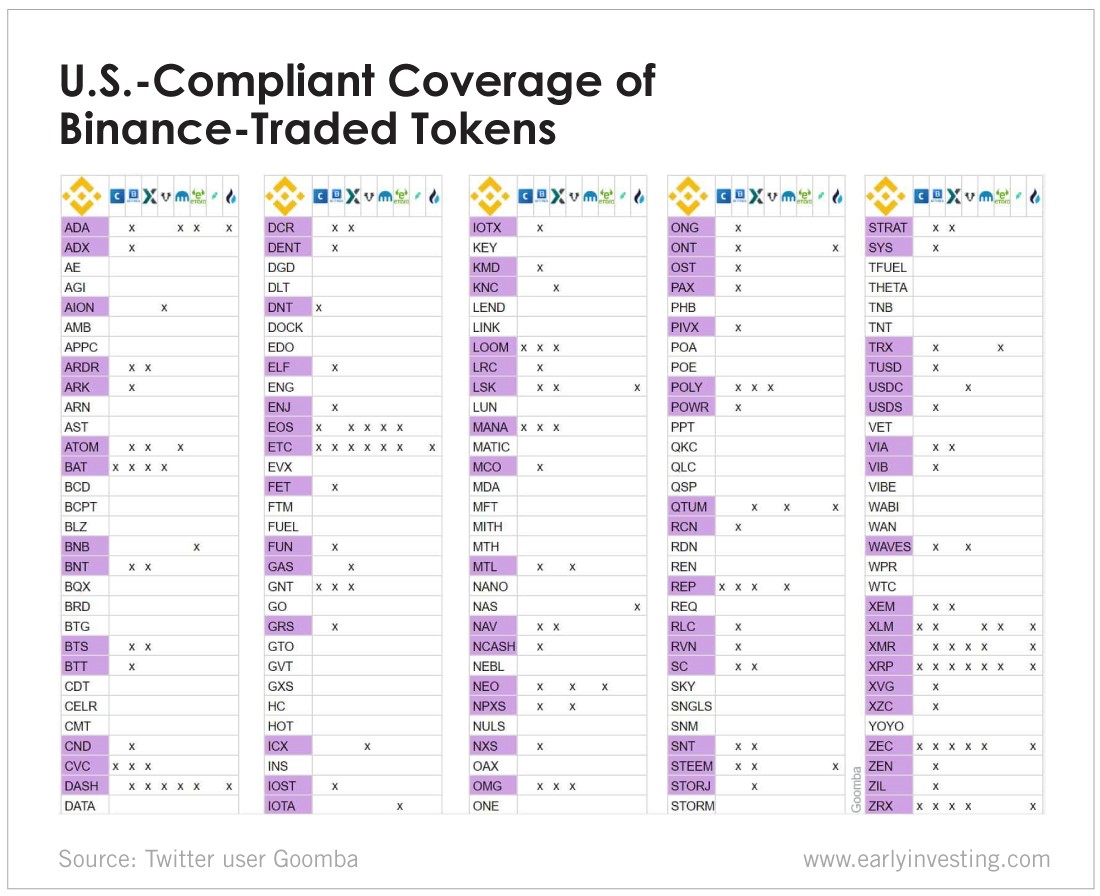 Many coins are listed on only one exchange other than Binance. More painful are the ones that have no trading outlet in the U.S.

Binance CEO Changpeng Zhao is aware of the problems U.S. traders are facing. But, sounding very Heller-like, Zhao says, “Some short-term pains may be necessary for long-term gains.”

Heller would have understood. I do too. But that doesn’t make the pain any less real.